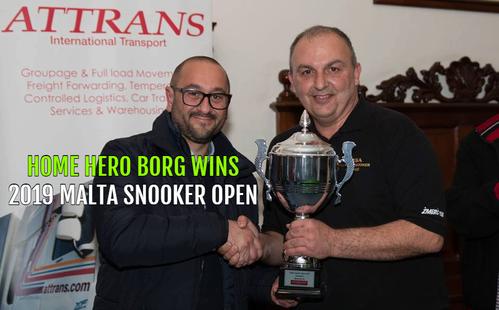 Players from across Malta were joined by hopefuls from outside the island during this annual week-long open event that was contested at the Peace Band Club in Naxaar.

Borg, who was part of the top tier circuit as recently as last season, began his campaign with 4-2 victories against fellow countrymen Chris Peplow and Frans Abdilla.

In the quarter-finals he eliminated England's James Cahill, the Q-School top-up player who stunned Mark Selby in the opening round of the UK Championship at the end of November, 4-2.

​A 5-1 success over Mario Cutajar booked his final berth where he denied Duncan Bezzina 6-4 to claim the title, trophy and 1,500 Euro.

Defending champion Brian Cini lost in the second round to Stephen Mangion (4-2) whilst Maltese cuesports legend Tony Drago bowed out in the same round to Arthur Cachia (4-2).

Preceding this, the same venue hosted the European Under 17 Open that was won by England's Connor Benzey.

Thank you to Vincent Pisani for his information and the photo above.