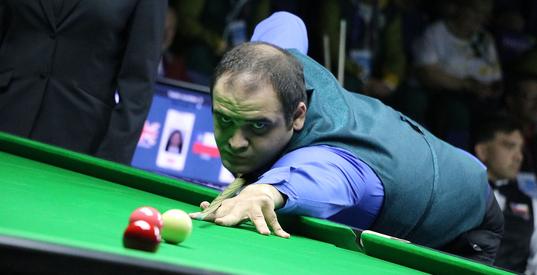 HOW ARE THE ROOKIE PROFESSIONALS DOING?​

​They achieved top tier status from a number of different avenues. Given the WPBSA's recent divorce with the IBSF, it will be interesting to see how the composition of new talent from across the globe will emerge in the near future. 9 of the 12 newbies this year are from outside of the UK.

All new professionals are now guaranteed two year tour cards. This is without doubt a better system than previous administrations in the past where rookies were often relegated after just one bite of the cherry.

We're only in August, but already 5 ranking events have commenced, although just the Riga Masters has been completed so far. I thought I'd take a look at how the new intake are coping with the stresses and rigours of this ultra-competitive circuit.

Reigning IBSF World Amateur Champion Vahedi is well travelled and certainly has pedigree when you look at his achievements in the amateur game.

Thankfully he hasn't suffered the same visa problems that fellow countryman Hossein Vafaei encountered when he broke onto the main tour. Vahedi has played in all five events so far.

​He narrowly lost to Sam Craigie 4-3 in Riga qualifying and as luck would have it he drew Vafaei in the China Championship but went down 5-0.

This week in Preston has been much better, though. He upset Martin Gould 4-1 to make the venue stages in the Indian Open and followed it up with a 4-0 defeat of Mike Dunn to feature at the European Masters. However Dunn did get some revenge in the World Open when reversing the tables with a 5-0 success.

Outside of the ranking events, whilst representing Iran alongside partner Vafaei, they reached the Quarter-Final Knock-Out stage of the World Cup. Vahedi also took the Bronze Medal at the recent World Games in Poland.

2016 IBSF World Under 21 Champion Xu lost to Vahedi in that Bronze Medal match in Wroclaw.

The youngster has lost four of his first five matches, although he did qualify for the Indian Open after he defeated Michael Georgiou 4-2 at the Guild Hall.

18 year old Totten is on tour courtesy of winning the European Amateur Championship earlier this year.

He did however take Thepchaiya Un-Nooh to a deciding frame (4-5) in China Championship Qualifying, where he also completed his first professional century with exactly 100.

Totten is due to face defending champion Judd Trump in the European Masters, as that match was held over to the venue in Belgium. Playing in front of the TV cameras and a likely hefty audience will be an experience.

​Still just 17, Yuan is already known to the snooker community for his two memorable 5-0 defeats of Martin Gould as a wildcard during events back home in China. He upset other pros too.

Now a full professional himself because of winning this year's Asian Under 21s, Yuan will look forward to the European Masters in October having made it their via a 4-2 win over Allan Taylor in qualifying.

Multi talented cueist and current Oceania Champion Bolton is currently making the trip back and forth from Australia.

Bolton is serious about his opportunity, he has installed a STAR table back home 'Down Under' in order to prepare. He didn't enter Riga or the CC, but did play at the recent triple header.

​The results weren't ideal; he won one frame in three matches. However Bolton does have more pedigree and experience than most who are in the same boat, despite the somewhat disadvantage of living on the other side of the globe.

He seemed encouraged on Social Media and is looking forward to the challenge. I expect him to be one of Australia's stronger players here of recent times.

We have known about Kleckers for a few years. It would undoubtedly be good for the sport if the enthusiastic German fans could have one of their own to cheer on.​ Kleckers' professional dream was realised at Q-School in May.

​The 21 year old made headlines a few weeks ago when he eliminated defending champion Neil Robertson 4-3 at the Riga Masters in front of the EuroSport cameras - in just his second match as a professional.

That is Kleckers' sole winning contribution so far, but the magnitude of it perhaps showed what he is already capable of.

He has entered all the tournaments so far and will appear in Lommel after ousting Jimmy White 4-3 in European Masters Qualifying.

Castle lost his other fixtures comfortably, but it is a long season and that trip to Belgium is already something to show.

A bit like Yuan, Hugill is remembered for sensationally halting in-form Neil Robertson as a top up amateur during German Masters Qualifying at the end of 2015.

​The Englishman earned full time rights via Q-School Event 1. It has been a mixed bag so far, but plenty of positives from this week.

His opening spell in Preston resulted in two defeats, but this latest stint saw him make the Indian Open because a 4-1 win against Mitchell Mann. It may have been even better, but he just lost out 5-4 to Vafaei in the WO and 4-3 to Thor Chuan Leong in the EM.

Chen - who was a Q-School Event 2 Graduate, has the most wins of all the rookies so far.

The Chinaman won his first pro match; qualifying for Riga by virtue of a 4-2 success over Ross Muir. Unfortunately he had to withdraw from the venue stages.

During the same qualifying spell he constructed a 103 break on his way to defeating the experienced Dominic Dale 5-3 and securing a berth back home at the China Championship.

Chen is also scheduled to be in Belgium - he beat Hammad Miah 4-2 last week.

Li is one of the China Billiard Sports Association's nominated players for the circuit.

He had to withdraw from the first batch of qualifiers presumably on visa issues, although he was present in Preston over the last 8 days.

​This week he lost to countryman Zhao Xintong and Mark King in Indian and World Open qualifying respectively, but perhaps registered the best comeback of the campaign so far when denying Stephen Maguire in the European Masters.

Trailing 3-0, Li won the next four frames to record a upset – eventually victorious on a re-spotted black.

Niu is the CBSA's other nomination this season.

It appears he had the same initial visa issue as Li, although he will face Ding Junhui in Round 1 of the China Championship because that match is held over to the venue.

He lost to World Champion pairing of John Higgins and Peter Ebdon in the EM and WO, but a 4-1 win over Lee Walker for India has got him on the board.

Eltahhan is the current African Snooker Champion. He has been unable to compete in the ranking events so far, but he did play for Egypt in the World Cup.

Picture above is courtesy of the WPBSA