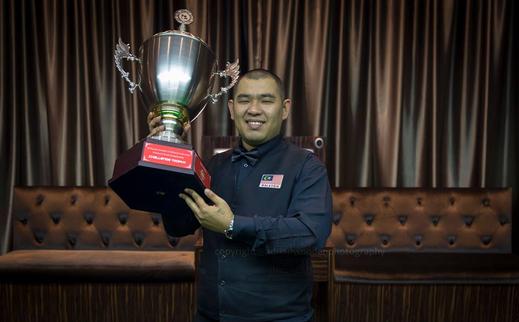 Sargon Isaac defended the United States National Snooker Championship; the third time in all he has won the title.

The 30 year old, who initially lifted the trophy in 2012, started the event by qualifying top of Group A with 4 wins out of 4 - dropping just one frame in the process.

In the Knock-Outs, he then eliminated Cheang Ciing Yoo 4-0 and Raymond Fung 4-2 (recovering from being 2-0 down) in the Quarter and Semi-Finals respectively.

After the first two frames were shared, breaks of 37 (Frame 4) and 56 (Frame 6) helped Isaac to a fairly comfortable 5-1 victory in the 24th staging of the competition.

Both Isaac and Aly Elsayed were awarded invites to the IBSF World Amateur Championship later on in the year.

For more information, and the full results, please visit the SnookerUSA.com website here.

Former professional Peter Francisco won yet another national snooker title after a dramatic 7-6 final win over Faaris Khan in Johannesburg.

A healthy field of 72 players entered this event, that was first competed for in 1937.

​In the KO stages, Francisco dropped just 4 frames in 4 matches.

The Final was a real tussle with the duo trading frames and exchanging the lead. It would eventually be decided on a potted pink by Francisco in the thirteenth and final frame.

​For more information, and the full results, please go to the Snooker and Billiards South Africa Facebook page here.

The current World Number 110, who made use of a gap on the World Snooker circuit, entered the fray a little later on courtesy of being one of the seeded players. A competitive and reasonably large field assembled for the tournament which carried a 7,000RM first prize (around £1,320).

There he faced his Malaysian World Cup partner of last year, Mohd Reza. In what was expected to be a keenly contested match, Leong emerged a 6-0 victor. It is the fourth time he has become the national champion.

Losing Quarter-Finalist Saiful Bahari made the highest break with an effort of 124.

​Picture above is courtesy of Adrian Wooden

​Would you like one of your national championship events to feature on 'The Cue View'? If so, please get in touch with us via our Facebook / Twitter pages, or email michaelday@thecueview.com.