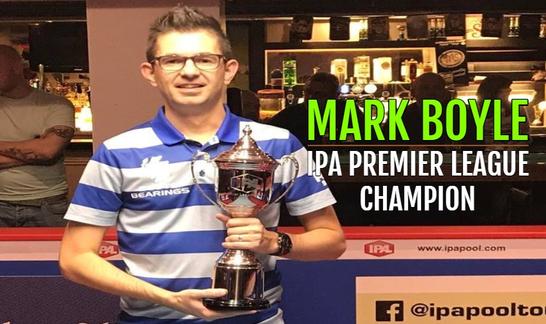 'Finals Night' was the conclusion to three months worth of high quality action that initially featured ten of the best players from the IPA circuit in a unique invitational event. After two separate league phases that saw players get relegated at each juncture, a quartet of hopefuls were left remaining for the knockouts.

Relatively local to the Rileys Solihull venue, Raybone dispatched fellow Englishman Jimmy Carney 6-1 in the opening match of the evening. Carney had qualified less than 48 hours before when he memorably squeezed in after getting a draw against Simon Ward in the very last match of the league phase.

Having taken a scrappy and protracted first frame, former World Masters Champion Raybone controlled proceedings and advanced when Carney cannoned another ball and went in-off after potting the black at the end of the seventh frame.

It was exactly the same scoreline in the second semi-final where Boyle saw off Welshman Ward. After starting the encounter strongly, the Scotsman capitalised on world finalist Ward's uncharacteristic unforced errors to go through with plenty of change to spare.

The best of 13 frames final immediately followed and it was a repeat of the IPA English Open title decider from May. On that occasion it went all the way with Raybone ousting it - the pair would cook up yet another treat here.

Raybone took early leads of 1-0 and 2-1, however, Boyle chalked up three on the trot to move 4-2 ahead before the next two were shared.

At this high level, fine lines can often be the determining factor. One of those factors being the break-off, which played a significant role here. Despite striking well and potting in Frame 8, Boyle's cueball was kicked in-off - his opponent duly cleared up. Raybone then strung together a break and finish to square the match at 5-5.

When Boyle went dry at the beginning of Frame 11, it seemed as if Raybone would punish yet again, but trusting to a bit of luck when going into balls off his final colour for position on the black, the cueball found gravity. The error was predictably stepped on and the Scot found himself one away from glory.

Credit to Raybone's resolve and class, though, he swept this disappointment aside and completed another break and finish in Frame 12 to force a deserved decider.

However, in testament to the quality on display throughout this year's IPA Premier League, Raybone never got another shot. Boyle broke and potted, but left the cueball in a very undesirable position for his first visit afterwards. Pushed to play an ugly plant into a middle pocket first up, and with only seconds on the clock remaining, Boyle delivered to begin his run.

The champion in waiting needed to pluck more courage up later on during the clearance when he coolly slotted home his penultimate ball down the left side cushion to land pretty much plumb on the black.

Still only in his maiden year as a professional, Boyle made the Premier League when he emerged from a Scottish qualifying event earlier in the season.

It seems he timed his form perfectly; after winning just one of his opening six fixtures, he managed to avoid relegation and make the top 6 for the second league phase. From there he really cranked it up a notch, winning four and drawing one of his next five fixtures to finish third in the table.

Only a few weeks ago he lifted the IPA British Open title in London, which at the time was his second honour on the circuit in 2018 following home success at the Scottish Professional in March. Away from the IPA scene he also won the Murphys English Open.

The next installment from the IPA is the Masters later this month, another new tournament that they are showcasing on FreeSports TV.

The image above is courtesy of the IPA