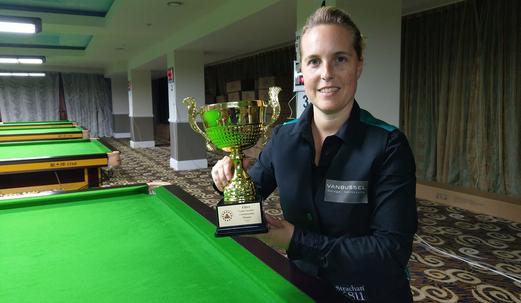 Wendy Jans and Darren Morgan further strengthened their dominance on the continental scene as they defended the European Ladies and Masters Championships respectively in Bucharest, Romania on Thursday evening.

Belgian Jans not only made it a remarkable dozen victories in this event, but went through the entire programme without dropping a single frame.

The 35-year-old topped Group A after winning all four of her fixtures before defeating Anastasija Sinngurindi (Russia) 3-0, Melissa Eens (Belgium) 4-0 and then Anastasia Nechaeva (Russia) 4-0 in the Knock-Outs to make yet another final.

Her opponent there was fellow countrywoman Cathy Dehaene who also hadn't lost a match on route, booking her final berth with a 4-2 win against Yana Shut (Belarus) in the Last 4. However, Jans was once again supreme as she sealed a comprehensive 4-0 result to retain the title.​

Just like Jans, Welshman Morgan was relentless whilst ripping through the draw at the Mirage Hotel in the Romanian capital. He qualified from his round robin claiming a hat-trick of 3-0 wins and then eliminated Yakov Shaashuashvili (Israel) 4-0, Risto Väyrynen (Switzerland) 4-0, David Vaitzman (Israel) 4-0 and Joris Maas (Netherlands) 4-0 to reach the title decider.​

Morgan would have a tougher examination against the Republic of Ireland's John Farrell in the final, who was also undefeated and had ended the hopes of Michael Judge via a deciding frame in the Quarter-Finals.

Farrell took the opening frame and also the fourth to leave the scores tied in the race to 4. However, Morgan secured the last two frames for a 4-2 outcome and another international honour.

Victory also qualifies Morgan for the World Seniors European Open later on in the year - one of the events on the exciting new circuit for those aged 40 and above.

Last week in Romania, Shachar Ruberg became the first player from Israel to win a major European Snooker title when he claimed the European 6 Reds Championship following a 5-1 success over Gary Thomson (Scotland) in the final.

23-year-old Ruberg now receives an invite to the World Professional 6 Reds Championship in Bangkok, Thailand at the start of September, a tournament which was won by Mark Williams in 2017.

The European Billiards and Snooker Association also held a unique one frame Shoot-Out competition for the first time which consisted of 16 players from 16 different countries. This was also won by Morgan after he defeated Switzerland's Tom Zimmermann in the final.

On Friday, the team events will conclude the championships.

Image above is courtesy of the European Billiards and Snooker Association.