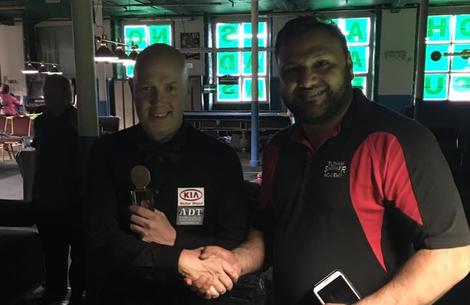 Jonathan Bagley is the second of four qualifiers to make the venue stages of the inaugural Snooker Legends UK Seniors Championship later this year.

​Following on from the opening qualification tournament earlier this month, the Oldham Snooker Academy played host to over 20 hopefuls across the weekend who were also vying for the £500 tournament win bonus on offer.

​Despite having played a Preliminary Round match, Bagley didn't drop a single frame in making the final; defeating Eddie Lott 3-0 in the Last 4.

Former professional Gary Lees would be his final opponent. Lees took the opening frame, Bagley levelled it and then moved 2-1 in front, but a terrific long pink with ideal position on the black from Lees forced it into the unique 'Black Ball Tie Break' decider.

With so much on the line it was understandable the Black Ball exchange was slightly scrappy. After an attempt at a long pot by Lees went awry, Bagley coolly dropped the Black into a middle pocket for a hard-fought victory.

It means the Englishman will line up alongside legends of the sport at Redhill Surrey come the end of October. Bagley is no stranger to the big stage on the Snooker Legends circuit, though. Earlier this year he qualified for the World Seniors Championship and reached the Semi-Finals where he narrowly lost to John Parrott on the Tie Break Black.

There are two more Qualification Events left - Edinburgh (September) and Clacton (October). Les Dodd claimed the first qualifying spot in Newbury a couple of weeks back.

If you wish to enter any of these events, or want to find out more about the World Seniors Tour (including ticket information), please visit snookerlegends.co.uk.

Written and published by Michael Day on the 28th August 2017