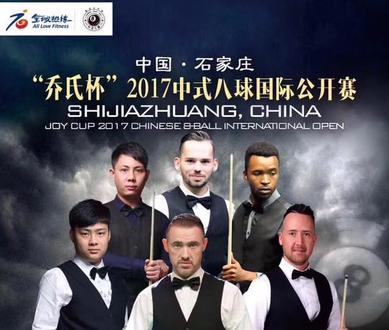 CUESPORTS STARS TO MIX IT IN CHINA

200,000RMB will go to the winner of the JOY International Open which begins tomorrow in Shijiazhliang, China.

The 32 player event features 16 Chinese Qualifiers and 16 International players who have been invited to the tournament - many coming from varied Cuesports backgrounds.

England's Gareth Potts, arguably the best Chinese 8 Ball player on the planet, will look to add to his third JOY World Masters title that he won earlier in the year.

Potts will face friend and two-time WEPF World English 8-Ball Champion Jason Twist in the first round. The pair met in the 2008 WEPF World Final, where Potts claimed his third winners trophy in that event.

Multi-cueist Pat Holtz of Scotland has an interesting opening opponent in former Crucible Qualifier Dechawat Poomjaeng (Thailand). The colourful Poomjaeng was relegated from the professional snooker circuit last season, but has entered a JOY Chinese 8 Ball event before.

American representative Corey Deuel, who is no stranger travelling to China for these tournaments, will be on the TV table against Wang Yun first up.

Later on in the day South Africa's Richard Halliday will feature under the cameras when he plays Zheng Yubo, who has been in fantastic form during 2017 having claimed back to back JOY Tour events in Linyi and  Lianyungang.

The entire event is run to a Double Elimination format; including the final. Races are to 13 although there is a 140 minute time limit, meaning if there isn't already a winner, whoever is in front will go through. Should the scores be level, there will be a penalty style tie-breaker.

*Stephen Hendry is due to be at the event, although he won't be playing.

Written and published by Michael Day on the 4th October 2017