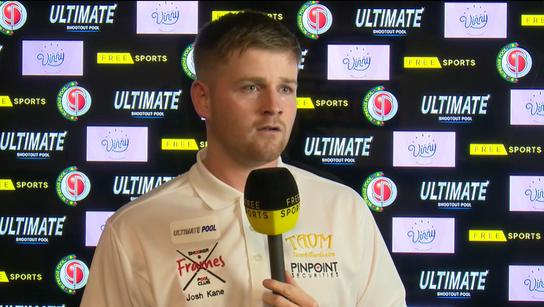 ​​Josh Kane triumphed in the opening group of the inaugural Vinny.co.uk Champions League Pool and progressed to the second phase of the tournament in February.

The refreshing new event is the first to be organised by Ultimate Pool and is broadcast by Freesports TV on Monday nights across 11 weeks. Played to International Rules with a shotclock and timed format, the 32-player invitational holds an impressive £10,000 first prize.

Former world masters winner Kane won three out of three matches in Group 1 at the Players Pool and Snooker Lounge in Newcastle-under-Lyme.

The competition’s curtain raising match saw Rob ‘Whacker’ Wharne come back from 2-1 behind to oust Martin McIntosh 3-2 before the 20-minute match clock expired.

Despite losing the first frame to Jimmy Croxton, Kane chalked up four consecutive ones for a 4-1 win in his maiden outing of the night. Croxton stayed on the table for the next match and made amends with a 4-1 victory of his own over McIntosh – a result meaning that the Scot could no longer top the group.

Wharne and Kane then met in a very significant encounter with the winner having destiny in their own hands, and it was Kane who held the position of power following a 3-1 success.

In the last set of matches, Wharne ended Croxton’s qualification hopes by defeating him 4-1 to move on to four points level with Kane, although the latter still had his last appearance against McIntosh remaining.

Needing just a point to seal advancement, Englishman Kane kept his 100% record – dropping a total of only three frames throughout – with a 4-1 win. He will now await the seven other phase one group winners before returning for the last eight.