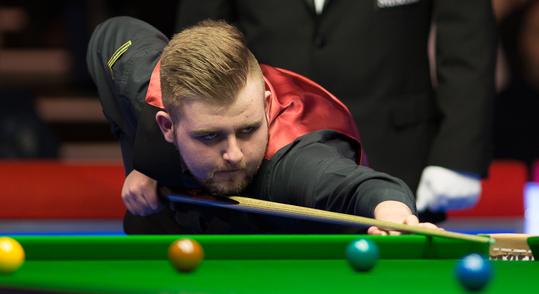 Teenager Jackson Page swept aside former professional Ian Sargeant 8-1 to claim the Welsh National Amateur Championship for the first time on Saturday at the Taffs Well Ex-Serviceman's Club in Cardiff.

This annual and most prestigious title on the Welsh circuit was played in stages throughout the season with the winners of regional qualifiers coming together in the Quarter-Finals - two progressed from the North Wales section and six from the South Wales section.

Page reached the Last 8 having won his opening three matches 4-0. He then eliminated Elfed Evans 5-2 and Darren Morgan 6-2 to make his debut in the final of a tournament that was first contested in 1928.

Due to Page's commitments at Q-School the date of the final was delayed, but the 16-year-old wasted little time when he faced his experienced opponent in the best-of-15 frames match.

In a clinical display of scoring, Page claimed the opener with the help of a 53 break and then doubled his lead courtesy of a 67. Efforts of 54 in both frames 3 and 4 took him into the mid-session interval 4-0 up.

On the resumption Sargeant managed to get on the board when he deposited frame 5 on the pink, but a run of 73 saw the youngster re-assert a four frame cushion. Page then took the last of the first session to move 6-1 ahead.

Returning later in the day, further proceedings did not take long. A 68 break allowed Page to secure frame 8, and despite Sargeant fashioning a 45 in the next he counter-attacked with a clearance of 49 on the final black to confirm the championship with minimal fuss.

According to Ronnie Allen, chairman of Welsh Snooker, it is believed that Page is the youngest ever winner of this title.

Next up for Page is Challenge Tour Event 2 which starts on Tuesday at the Guild Hall in Preston.