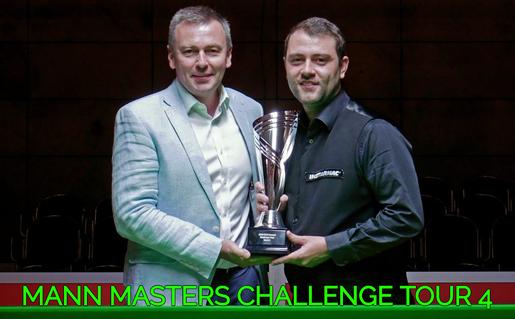 Four events on this season's Challenge Tour have been completed and there have been four different winners. Mitchell Mann is the latest player to add to that sequence following victory at the Stadthalle in Furth, Germany on Tuesday afternoon.

Relegated from the professional circuit earlier this year, Mann has adapted well to the new second tier of the sport; the £2,000 he banks here moves him up into first place of the CT rankings. At the end of the campaign - after all ten tour stops have been visited, the top two in the rankings will earn guaranteed two-year professional tour cards.

A trio of successes against John Foster (3-2), Charlie Walters (3-1) and Jake Nicholson (3-1) on Monday advanced Mann into the Quarter-Finals.

There he met David Grace, in a repeat of the Event 2 final from Preston. However, Mann reversed the outcome with a 3-1 win. That was the last frame Mann would drop as he defeated Ben Hancorn 3-0 in the Semi-Finals and then teenager Dylan Emery 3-0 in the final.

26-year-old Mann has shown consistency on the Challenge Tour, this tournament glory goes alongside his Last 8, 4 and Runner-Up finishes previously.

Challenge Tour Event 5 takes place at the Cueball in Derby on the 18th and 19th September.