Last Saturday night during an exhibition at the Central Hotel in Donegal, Mark Allen and Kyren Wilson compiled, what is believed to be, the first ever Scotch Doubles 147.

Played far more frequently on the Pool scene, Scotch Doubles is different to traditional doubles as players alternate every shot, instead of every visit.

Only a few weeks ago Mark and Kyren contested the Masters final at the Alexandra Palace in London, but during their re-match on Irish soil, the pair teamed up to face former professional Michael Judge and Anthony Bonnar in a challenge frame. What happened at the end of it was history making.

The duo went through all 15 reds, 15 blacks and the colours to complete a very unique moment in snooker history. Throughout the break there was great camaraderie between the both of them, and some fantastic shot-making to keep the break alive.

After a tremendous potted pink with the rest from Allen, it was left to Wilson to sink the final black and cue joyous celebrations.

Discussion and debate on Social Media has pretty much concluded that this is the first ever instance of a perfect frame being conducted by two players in a Scotch Doubles format.

Previous recordings of big breaks made in this manner have been few and far between. At the 2015 EBSA European Team Championships in Malta, Welsh pairing of Gareth Allen and Duane Jones made a 130 break. Ironically, the highest break of this type before then in that tournament was Irish duo of Rodney Goggins and Judge with a 113.

During last summer's CVB Snooker Challenge team event between host nation China and Great Britain, it is understood (according to Wikipedia) that Ronnie O'Sullivan and Mark Williams made a 131, but teammates Joe Perry and Graeme Dott chalked up a 135.

It is not the first time Allen has been involved in a century break this way. At the 2011 World Cup in Bangkok, Thailand - when they used this format, alongside partner Gerard Greene representing Northern Ireland, the pair apparently racked up a 110.

Robbie Watson, head of the 'Ambassadors of the Green Baize' set-up, was the mastermind behind the exhibition which was in memory of his late father. It was their first show on Irish soil.

​The video of the 147 between Mark and Kyren has been downloaded onto YouTube. You can see this below. (I think the video starts from 24). Enjoy!​​​​​​ 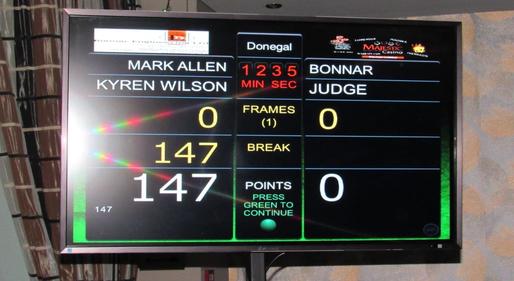 Image above is courtesy of Robbie Watson.

Written and published by Michael Day on the 19th February 2018