​Mark Selby got the better of fellow Leicester cueist Tom Ford to claim his first trophy of the season at the Haining Open, making a maximum 147 break in the process too.

Now under the organisation of the Chinese Billiards and Snooker Association (CBSA) and part of a Chinese Tour, this event has been difficult to follow for fans here in the UK, with virtually no social media footprint whatsoever. This was a pity as it featured a number of top tier players competing alongside amateurs from Asia.

The format was similar to when it was part of the now defunct Asian Tour a few seasons back with amateur qualifying to get into the main 128 player draw and best of 7 matches, except for the final.

On his way to the title, World Champion Selby defeated Zhang Anda and Stuart Bingham in the Last 16 and Semi-Finals respectively. He won the final 5-1, constructing the 147 in Frame 3.

Selby created history last season by claiming five major ranking titles (including the 3 biggest) and banking nearly £1 million pounds overall. However, up until now, this season had been slow for the World Number 1 as he failed to reach a single Semi-Final in his first six events.

Ironically, the first of Selby's trophies last season was at the Paul Hunter Classic where he denied Ford in the final too.

This event acts as a warm up for the lucrative International Championship that starts in Daqing on Sunday. This is another competition that Selby goes to as the defending champion.

Picture above is courtesy of @PseudoRolf

Results - from the Last 16 onwards

Written and published by Michael Day on the 27th October 2017 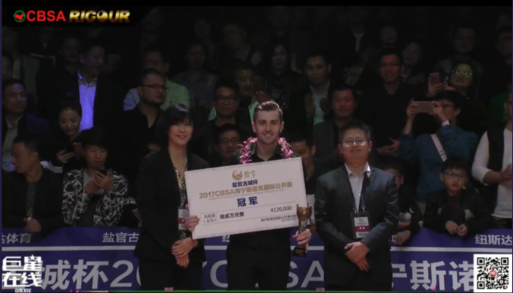