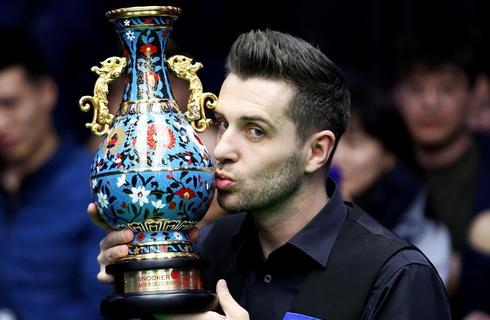 ​A new venue, a new format, a new trophy and a new massively increased prize pot, but there was a very familiar winner of last week's China Open.

I reckon a lot of us guessed Mark Selby would be back soon, especially given the time of the year. After a winter of discontent for the World Number 1, Selby sprung into life in Beijing to defend and secure a third China Open title and bank a rather handsome £225,000 winners kitty.

Having won the tournament in 2015 and 2017 (he withdrew from it in 2016), Selby has won 21 consecutive matches in this competition – the longest running overseas event on the professional circuit.

Selby once again showed his matchplay powers and pedigree, claiming 51 frames in seven matches across seven days. The hike in frames doesn't seem a problem for 'Iron Man Mark'; he has now chalked up 13 multi-session match victories in a row. The last person to defeat him over distance was Ding Junhui during the final of the 2016 Shanghai Masters - a loss Selby has made up for multiple times since.

He excels over the longer distance and makes the transition so effortlessly – he doesn't talk about it being a problem. Compare that to Ronnie O'Sullivan, who in the past made public the demons he experienced over such races.

I believe Selby now has a peak-Hendry like status in these types of fixtures. Opponents of his know they have a very big, intimidating mountain to climb. As well as being so mentally tough, Selby also appears physically fit, a distinct advantage that I feel is often overlooked for the 'Marathon of the Mind'.

A severe workout looks like ideal preparation for the defending World Champion who is aiming to deposit a fourth title in five years at the Crucible. Everyone has taken note, including bookmakers – Selby's three closest rivals in the odds (O'Sullivan, Trump and Higgins) were nowhere to be seen at the business end in Beijing.


A RETURN TO CONSISTENCY FOR HAWKINS
After a dreadful first half of the season, both on and off the table, it is great to see Barry Hawkins once again competing for major honours.

Whilst he'll likely be disappointed about the deciding result to Selby, his run in China would be his second final in as many months after being ousted by John Higgins in a high-quality encounter at the Welsh Open.

Ever since winning his maiden ranker at the Australian Open in 2012, Hawkins has been so stable and consistent, he has comfortably been an established Top 16 member for the last five years now. Looking at his record after that triumph in Bendigo, Hawkins has reached at least the Semi-Finals of 15 ranking events. He was the 2016 Masters Runner-Up too.

Despite missing out on the Players Championship and the chance to defend his World Grand Prix title, I understand that the prize money Hawkins accumulated in the last few weeks has actually put him in the top 16 of the one year list – quite a turnaround. It also elevates any longer term worries he may have had about his elite ranking after that dip in results this campaign.

He may not be as prolific as Selby, but Hawkins is as hard as nails with an excellent temperament. Looking towards the Crucible he can be buoyed by a very impressive recent record there that has seen him reach at least the Semi-Finals in four of the last five years. In 2016 he also made the Quarter-Finals after eliminating O'Sullivan during a deciding frame in the Last 16.


A 147 SPURT
After a relative lull in maximum making on the professional circuit, three were made in the space of nine days.

The spurt started with Luca Brecel's maiden max at the unique Championship League. Behind closed doors, the Belgian's effort banked him just £500.

This was followed up by O'Sullivan's fourteenth career 147 and Stuart Bingham's fourth - made on successive days at the China Open.

Because the last 147 made at a ranking event was Cao Yupeng's during December's Scottish Open (Martin Gould had one at the CL in January, though), the rollover pot was up to a rather tasty £35,000. With a highest break prize of £7,000 on offer in China, the total purse was £42,000 (no wonder 'The Rocket' went for this one) - a sum shared equally between Ronnie and Stuart.

The rollover situation was similar to last year's edition of the event when Trump collected a sizeable pot. I'm not saying I didn't want one made in China, but it would have been nice to see an additional chest of treasure up for grabs at the World Championship - a substantial bonus amongst an already glittering array of prizes.

However, Barry Hearn teased us on Twitter by saying something could be lined up in regards the prize for a 147 at the Crucible. I'm not sure it will be the £147,000 (£1,000 a point) that was on offer back in the day, but it sounds like Mr. Hearn has a nice surprise up his sleeve for the players. It makes commercial sense for the ante to be raised for perfection at Sheffield - it would be a piece of history around forever.