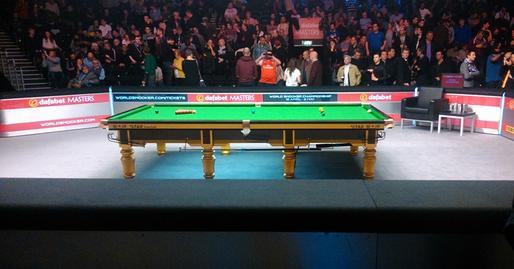 ​I’m not sure how other people were, but I thought it felt a little bit eerie when Ronnie O’Sullivan equalled the great Stephen Hendry’s total of six Masters titles on Sunday night.

For many years now, pundits and fans have discussed, and quibbled, over how many of Hendry’s records O’Sullivan could match, or beat.

What seems all of a sudden, ‘The Rocket’ is now level with the Scot in terms of Masters and UK Championship victories - 16 ‘Triple Crown’ titles if you add his five World Championships too.

Ronnie quite often divides opinion on a number of things on and off the table, but no one can question his ability. Sometimes I think people do him a injustice when they talk about his immense natural talent; obviously he has stacks and stacks of it, but he has also worked so very hard over many years of hard graft practice.

Over two decades on from his maiden breakthrough at the UK’s in 1993, he is still scooping up snooker’s major honours - a span of nearly 23 years and counting.

Putting that into context, Steve Davis won all his triple crowners in the space of 17 years, whilst Stephen Hendry managed it in just over 10.

To temper those statistics, though, O’Sullivan has had many lean spells without silverware in his career. As perversely as it may sound, I could argue he is one of the sport’s underachievers!

But the fact is, even at 40 years old, he is still the bookmakers favourite for any competition he enters, as he continues to outlast generations in the professional game.

O’Sullivan also won this 42nd edition of The Masters playing predominantly his ‘B’ game, although he managed to damage his opponents at crucial times where it really hurt.

He eliminated three World Champions on route to the final, including the last two Crucible Kings in Mark Selby and Stuart Bingham.

Without doubt, his best performance seemed to be saved for Selby in the quarter-finals, with his long pot success stats registered at an impressive 83%.

When ROS won that match, I felt it would be extremely difficult for anyone to stop him. Selby has hurt him on multiple occasions - it must have been a release of pressure amidst a very sweet success. A psychological roadblock out of the way.

However, top tier sport is so often decided by fine lines and tight judgements. Mark Williams was potentially a shot away from eliminating the eventual champ in the deciding frame of their first round clash. But the attempted plant he played in frame eleven when leading was ill fated, and gave Ronnie the chance to counter - which he duly did.

I was quite fortunate to dedicate a lot of time into watching The Masters over the last week - I even went up to watch the O’Sullivan v Williams clash.

Without doubt, in terms of quality, it was one of the best Masters I have ever witnessed.

Despite the thumping he received at the hands of O’Sullivan in the final, Barry Hawkins can be very proud at what he achieved at the Alexandra Palace.

Before his opening round win over friend Joe Perry, ‘The Hawk’ had never won a single match in this event in five previous outings. His semi-final win over Judd Trump must also be one of his best career victories to date.

Trump, himself, was in red hot form during his Last 8 success over ‘Player of the Season so far’ Neil Robertson.

Their match was arguably the greatest that snooker’s most prestigious invitational tournament has ever seen.

6 centuries between them (a record for a best of 11 fixture), a pair of seventies and a breathtaking deciding frame finish - what a match! It also showed the kind of display what was required to defeat Robertson!

We are still yet to see a long haul encounter in a final between O'Sullivan and Robertson!

There were only two ties that went the distance, the matches I have mentioned above, but there was drama and intrigue from the start - who can forget defending champion Shaun Murphy going out in the first rubber, and falling victim to the dreaded three consecutive foul and miss rule?!

Other highlights, for me, included the notable standard of the John Higgins v Liang Wenbo meeting, and the exhibition Selby put on when sweeping aside Ricky Walden 6-0.

The pro snooker circuit now takes a rare week’s break, before resuming with Championship League Snooker Groups 3 and 4 starting on the 25th.

Written and published by Michael Day on the 19th January 2016