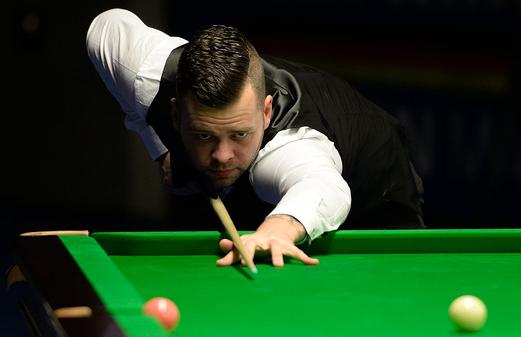 It's safe to say there were a number of surprises / breakthroughs during the last snooker season.

Teenage pairing of Zhou Yuelong and Yan Bingtao took the World Cup for China B, Kyren Wilson emerged from near the back of the pack for the Shanghai Masters, Martin Gould bagged his first major ranking title whilst Rory McLeod claimed the Ruhr Open in his 22nd year as a professional.

We also saw impacts from Tom Ford, Tian Pengfei, David Gilbert and Luca Brecel; who each made at least a final.

With the venue stages of the Riga Masters due to start on Wednesday, we look at some of the players under the radar, and currently outside the World's Top 32, who could make a lasting impression this season.

I'm not necessarily saying all these five players could win an event, but I certainly think they are capable of springing a significant upset or two throughout...

It may surprise you to know this will be Jimmy's 10th season as a professional.

However, that decade of snooker on the top tier has been across three different stints - he had unsuccessful one season spells in 2002/2003 and 2007/2008.

Since his re-return onto the tour in 2009/2010, Robertson has consolidated his pro status and made gradual increases up the World Rankings; he begins this season at a career high of 34.

Consistency has become the key for the 30 year old. I guess proof of this is that he has qualified for the Players Championship Grand Finals the last three years in a row; these appearances were courtesy of Last 16 runs or better in the European/Asian Tour events. In his career so far as a whole, he has reached the Quarter-Finals or better (3 SF's) seven times in these minor ranking outings.

In terms of the majors, he has qualified for the Crucible twice before (2011 and 2015) and last season made the Last 16 of the International Championship in China. He is also a frequent qualifier for main venues and each of his last four campaigns have seen him beat his personal best total in terms of prize money won in a season.

He is also 2 out of 2 from Preston a few weeks ago - making it for the World Open and Riga Masters.

During 2015/2016 he did beat the likes of Barry Hawkins, Marco Fu and Stephen Maguire. I just feel it might be his turn to beat an even bigger name, possibly on TV, this time around. Once he does, it may just unlock something mentally and he could go on a real quest for silverware somewhere.

Not many players preserve their professional status via breaking into the World's Top 64 after their first two seasons on tour; but that is exactly what 18 year old Zhou has done - and quite comfortably in the end.

This Chinese sensation won the IBSF World Amateur Championship in 2013 as a 15 year old - at the time he was the youngest ever player to lift the famous trophy.

Although being a wildcard for a number of home pro events, Zhou made his full time bow at the start of 2014/2015.

He fared admirably as a rookie, frequently winning his opening match in events and appearing in at least the Last 32 of five tournaments throughout (his best was a Quarter-Final finish in an Asian Tour stop).

Last season, however, was when people really stood up and noticed. As mentioned in my introduction, alongside Yan (who is even younger!) he gave the home crowd a dream outcome by taking the World Cup after eliminating traditional powerhouses England in the Group Stage, then Australia, Wales and Scotland in the knockouts.

Admittingly, these were one frame ties at a time, but playing up to the pressure was very impressive indeed.

Courtesy of this title, he was awarded a place at the lucrative Champion of Champions in England. Live on TV, he upset then World Champion Stuart Bingham in a deciding frame as the curtain raiser to the event.

Like Robertson, he too made it to the Last 16 in the IC, and was only three frames away from a maiden bow at the Crucible.

Again, as his exposure increases, experience will be gained. He could definitely cause a shock or two once more. Zhou has already made it a hat-trick of qualifications for Latvia, India and China too.

I believe only Alfie Burden earned more than Martin last season in terms of players on the first year of a two year guaranteed tour card. The £26,875 he banked puts him well on course to break into the Top 64 threshold come the end of this campaign.

The Englishman enjoyed a number of victories, but had a terrific back end of the season which included a Last 16 run at the China Open.

Consistent displays saw him pick up prize money in most competitions - in fact, he won his opening match 12 out of 15 times throughout the year, a very healthy return in deed when you consider he often faced higher ranked opposition.

To be fair, I probably said this to a few people near the start of last season.

After finally appearing to get his long standing visa issues sorted, the Iranian youngster won four matches to qualify for the venue stages of the Australian Open in Bendigo before losing 5-3 to Michael White in the Last 32.

During withdrawing from Euro Tour events 1, 2 and 3 (not sure why...possibly legal paper stuff again?) he also won a brace of fixtures in Shanghai Masters qualifying.

His season kind of curtailed from there on in, although a number of his losses were in deciding frames.

Hossein has real potential, he is also the first ever pro player from his country.

If he can feature in all the tournaments, I still think he could be very dangerous.

I'll admit this may be a bit of a punt, but looking at his results so far, he certainly looks competitive and worthy of a place on the circuit.

Back at Ponds Forge in April he narrowly lost out 10-9 to fellow countryman Thepchaiya Un-Nooh; he also made five breaks over 60, including a century on his debut in a major.

​He recently appeared in all three portions of Guild Hall qualifying too. He held his nerve to shock World Number 27 Ben Woollaston by winning 4-3 to qualify for the main stages of the Indian Open.

Songsermsawad very nearly doubled up in the World Open too, although this time he was on the receiving end of a narrow defeat when going down 5-4 to Zhou. He did, however, compile another century.

He will perhaps be most remembered, though, by taking newly crowned two-time World Champion, Mark Selby, to a deciding frame in the initial round for the Riga Masters.

This was Selby's first competitive outing since the Crucible, yet he needed a seventh and final frame victory on the colours to dismiss the youngster.

​Akani is one of seven players from Thailand amongst the ranks this season. Over recent times many of those have shown glimpses of real potential; Un-Nooh being the most prominent.

Could Akani be the next big thing from the South-East Asian country?

Which 'Outsiders' do you think could cause up a stir this season? Let us know via our Facebook and Twitter pages below!