​​Despite being a very small island nation with a population of under half a million, Malta has a proud and established Cuesports heritage.

Malta has made noises in many table disciplines. In terms of Snooker, people will likely highlight former World Number 10 and International Open finalist Tony 'The Tornado' Drago. However, it was Paul Mifsud who got it started after winning consecutive World Amateur Championships in 1985 and 1986. The following year Joe Grech reached the final too.

Multi-talented Drago was also successful on the American Pool scene claiming the prestigious World Pool Masters in 2003 and being on the victorious European Team for back to back Mosconi Cup glories in 2007 and 2008. On debut in '07 when contested in Las Vegas, Drago won the MVP (Most Valuable Player) award.

The country has had a number of prosperous teams and individuals in the world of English Pool as well - Claudio Cassar was the World Blackball Champion in 2014.

Besides producing quality cueists, Malta has proven its hospitality by hosting many big Cuesports events. It held a professional snooker tournament on 15 occasions (a combination of the European Open, Malta Grand Prix and Malta Cup) and was home to the World Amateur Championship in 1978 and 1992.

​The before mentioned 2008 Mosconi Cup also took place in Portomaso, whilst the Dolmen Hotel in St. Paul's Bay is a popular venue for international English Pool and Snooker competitions.

Most recently at that particular hotel the inaugural World Snooker Federation Championships were completed. A historic event for the sport, Women's, Seniors and a Mixed Singles title were played for - the latter now being the most prestigious prize outside of the top tier with a professional tour card included in the winners' package.

Four Maltese representatives made the Last 32 of the Mixed Singles; the best performing was Duncan Bezzina, who was eliminated by eventual Runner-Up Adam Stefanów of Poland.

The future for Maltese Snooker appears to be bright and forward-thinking with the recent news that a purpose built 'Snooker Academy' is in the process of being completed.

The academy will offer professional conditions and houses multiple Star tables - the official supplier for the World Snooker Tour.

Its aim is multi-disciplinary; getting new players to take up the sport, whilst being a practice facility for Malta's top players in order for them to prepare when they go to major worldwide events.

"The academy will be run jointly by SportMalta (our National Sports Council) and the Malta Billiards and Snooker Association.

Its purpose first of all is to encourage local youngsters to take up the game of snooker. It will also be used for our association to run its own competitions (National Championships, ranking events etc.), and to prepare our national players for international events (IBSF, EBSA and WSF).

In Malta we don't have any snooker clubs at all and our tables are mainly in band clubs, political clubs etc. with one table in each club spread across the island. So we were really struggling as an association to provide an ideal environment for our players (good tables, proper conditions etc.)

However, thanks to this academy many of these problems will be solved and hopefully we will continue to produce great players like in the past which made Malta one of the top countries in the World at amatuer level and hopefully will have some of these youngsters make it to the Main Tour.

The academy will have 8 Star Snooker tables and about 4 for the Juniors."

Below, and above, are some pictures that Alex sent me to show how the building and rigging process is taking shape.

I would like to thank Alex for all his time and effort in responding to me, it is very much appreciated! Thank you to Brian Cini for his input too.

With a World Class facility that their players can use to hone their skills, Malta is serious about putting itself in a strong position on the global Snooker map. 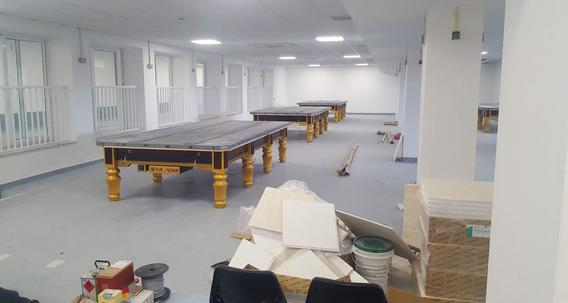