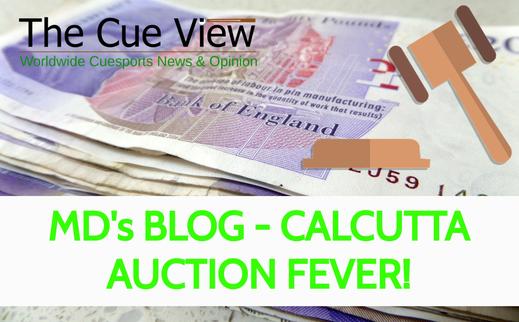 ​A few months ago, not many of us in the UK had even heard of a Calcutta Auction, yet alone be part of one (either as a bidder or a player). However, it has taken the English 8-Ball Pool world by storm over the last few months and has generated interest, intrigue and significant revenue for both punters and players.

What is a Calcutta Auction?

The best way to describe this is by a scenario...

Say there is a 64 player tournament. Each one of those 64 players will be bid on.

Punters bid for the players, the highest amount bid for each player wins that player.

After all the 64 players have been sold (and the money has been collected) the 64 amounts of money are all put into one big prize pot.

Before the auction, a predetermined percentage for each of the latter finishing positions in the tournament were set. A typical structure maybe something like 35% to the winner, 25% to the runner-up, 10% each to the semi-finalists, 5% each to the quarter-finalists.

The players themselves can also cash in on a Calcutta. As well as being allowed to bid on themselves, they also have the right to contact the winning bidder on them (within a certain timeframe) and buy half of themselves. If they do, any prize money won via the Calcutta Auction prize fund is shared equally between the bidder and player.

Modifications can be made to a Calcutta prize structure. Some organisers may elect to list the 'elite players' in a competition (those most likely to win, or do well in the tournament) - all of these will be bid on individually.

The 'non-elite players' are typically placed in groups of 4,5,6 (can be more or less) and bids are made for these players collectively – so you will have your money on more than one player.

What has happened so far?
I understand this type of auction is established in the USA and Australia. Looking at research, I believe Golf, Basketball and Backgammon have been bid on this way in the past.

With the creation of Facebook Live where people all over the world can come together at the same time and connect, this is the modern-day virtual Calcutta Auction room setting. Depending on the number of players, an auction is advertised in advance and can take over multiple days.

The ground-breaking Supreme Pool Series – the richest ever English 8-Ball Pool Series that is taking place throughout the year, was the first to bring this to the big-time UK Cuesports marketspace a few months ago.

So far there have been two Calcutta Auctions for this series (Event 1 has been completed, Event 2 is coming up). Event 1 raised over £63,000, whilst the latest auction saw just shy of a staggering £100,000 put in, with tournament favourite and four-time current WEPF World Champion Mick Hill going for an eye-watering £10,600.

With so much interest and intrigue, other tournament organisers have also done Calcutta Auctions, with many more to come.

The pros and cons of a Calcutta Auction

A Calcutta Auction certainly adds another dimension to tournaments - there is a different buzz. It also extends the life of a tournament, because there is a pre-event before the main show. This potentially makes it more attractive to sponsors and gives more 'airtime' and limelight for the players.

As players can either buy themselves in whole or half, there can be some very significant financial benefits for them - these amounts can be bigger than the sums of money they are competing for in the general prize fund.

So, what are the down sides to a Calcutta Auction? First of all, the legalities. I'm not totally sure of the exact rules and regulations to holding an auction, but I believe you either require a licence of some sort or a percentage of the total prize pot goes to charity. I know of a recent Calcutta where 5% went to charity - obviously another positive thing.

At the end of the day, whilst there is some method in bidding for a player and perhaps having 'inside knowledge' of how someone is playing, it is gambling. Some of the sums of money mentioned are quite hefty for most people's bankrolls, however, some will be part of a multiple person syndicate so the financial burden may not just be individual.

There could be a scenario where a Calcutta Auction is open to abuse and it be beneficial for a player to deliberately lose to someone (NOTE - I am not suggesting this has happened, or this is aimed at anyone). One factor of the Calcutta that may need to be changed is that players can bid on other players in the same event - this certainly could be awkward should both meet towards the end of a tournament.

Will these Calcutta Auctions stay?

I suspect they will remain part of the English 8-Ball Pool landscape forever now - in what capacity, though, I don't know.

With the concept still being very new, not for one second did I believe the recent Strachan Cup auction would amass nearly £100k. It is possible that amount could be bettered by the end of the Supreme Pool Series (there are three more events after this one).

My only fear is that it could be overplayed. I'm not necessarily against it for lower stakes tournaments, but the interest could wear thinner and people could go skint!

Could it come to snooker?

Calcutta Auctions in their current form would certainly be prohibited in regards professional events. Players betting on themselves and other players would obviously be an absolute no-goer, they are playing for large, life-changing amounts of money anyway. There is no reason why smaller club events couldn't do it, though.

It isn't a secret how many players and fans of the Cuesports community like a gamble, but remember, if you do take part in a Calcutta Auction, GAMBLE RESPONSIBLY!