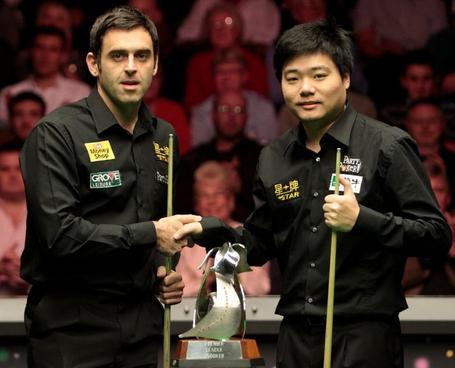 MD's BLOG - DO YOU MISS THE PREMIER LEAGUE?

​​Perhaps a bit of a niche topic to discuss this week, I kind of stumbled upon the now defunct Premier League to talk about...

In the past Sky used to broadcast a variety of events; back in the 90's this even included some from abroad. However, their most consistent, long term affiliation was with the Premier League, a tournament they initially showed as a delayed highlights package before later editions being televised live on Thursday nights throughout the season.

I could talk about Sky's relationship with snooker more (perhaps a different article in the future?), but I wanted to take a look back at the PL and whether snooker fans miss the uniquely structured competition which we no longer have.

Looking into the history of the event, it had always been invitational and non-ranked. It actually goes down in history as one of the sport's longest even run professional concepts.

Starting off in 1987 as the Matchroom League, it changed names to the Matchroom International League and then later the European League. 2012 was the last year it was competed for, effectively being replaced with the Champion of Champions in 2013.

The Premier League had many changes in its existence regards the format, but it did always host some of the world's top players at the time, plus often legends of the sport. Ronnie O'Sullivan won it a staggering 10 times, maybe suited to the timed conditions that a lot of his victories were played under.

Personally, I miss those Premier League Thursdays. I used to really enjoy watching each week, knowing the household names were guaranteed to be competing. I must confess I also liked the way Sky showcased it - it was flash, but not too over the top.

In terms of the live Premier League experience, I thought it was a great idea. There was an exhibition style nature to it, but under very competitive conditions. There is something special about a one table set-up, and the fans knew exactly what they were going to be seeing when they purchased their tickets beforehand. Because of this, crowd numbers always appeared impressive.

The Premier League's dates also took the roadshow across the UK to many venues where they hadn't seen snooker action on this scale before - albeit being for one night only.

It also appeared popular with the players. With the exception of O'Sullivan in 2012, all those invited seemed to take up the offer (bear in mind there were far less tournaments for them to play in at certain periods). The top players yearn to compete on the one table in front of capacity crowds.

The prize money on offer was also very decent - for a night's work they banked £1,000 for every frame won, plus an additional £1,000 for every century break they produced. Towards the end of the first decade of the new millennium, this prize money was guaranteed by Matchroom Sports, despite the prize funds in a lot of World Snooker events going down.

On the whole, each edition featured the best players at that time, although quite often legends like Hendry, Davis and White were accommodated for despite being lower down the rankings at the time. Whilst this may have muddied the idea slightly, they were (and always will be) crowd pullers.

In a sport where all tournaments are straight knockout, the Round Robin with a Play-Offs finale offered something different again. Once more, matches could even end up in a draw. The Premier League had its own identity, its own brand, there's no denying that whether you liked it or not.

Sure, sometimes they didn't get it right, most notably in 2011 when they introduced a whole host of confusing and (IMO) ill-advised changes. The composition of the fixtures was arguably unfair too.

The last edition in 2012 was won by Stuart Bingham, who I guess is still the defending champion! That year was memorable for a number of reasons, most notable being Ronnie's absence and Stephen Lee having to be withdrawn mid-event. Bingham also created one of the most freakish nights in snooker folklore when he whitewashed Mark Selby and Neil Robertson both 6-0 in the same session.

So, why did the Premier League stop? Fundamentally, the busy, hectic schedule in the Barry Hearn era means there isn't enough space for it. Making room for 10 Thursdays (or another night of the week) and a Play-Offs weekend would prove very tricky in this new climate.

Those who would probably qualify for it, now earn their place in the six day, ITV4 live screened Champion of Champions with £100,000 going to the eventual champion. It is proving to be one of the most established and anticipated dates in the diary.

I asked fans on line as to whether they miss the Premier League; most do.

However, times move on. Currently the sport is in an extremely healthy position with new boundaries being explored all the time. It is extremely unlikely PL Snooker will be making a return any time soon.

Picture above is courtesy of Matchroom Sports

Written and published by Michael Day on the 16th June 2017