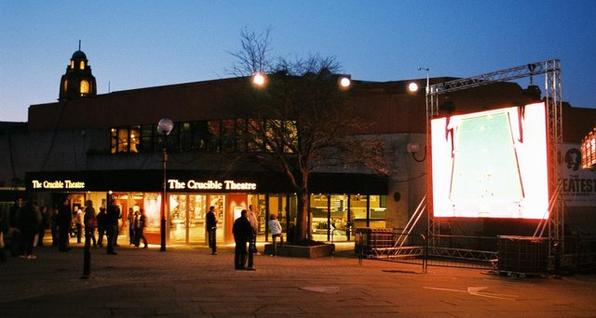 MD's BLOG - DO YOU REMEMBER THESE CRUCIBLE QUALIFIERS?

The Crucible Theatre is the stage all snooker players dream of playing on. However, some matches, and players, are far more memorable than others.

Over 200 players have appeared on the 'hallowed carpet' since 1977. As we celebrate the 40th year anniversary of snooker's spiritual home, I thought I'd go down memory lane to honour some of the event's perhaps less remembered competitors.

Before Hendry, Higgins and Dott, Jim Donnelly was the first ever Scottish player to grace the Crucible in 1982.

This was the first year the field for the venue stages of the event rose to 32, thus giving more players further down the rankings the opportunity to feature. In qualifying he beat fellow Scots Matt Gibson and Eddie Sinclair both 9-8.

It was however a bit of a baptism of fire in Sheffield as he was drawn to play 6 times World Champion Ray Reardon in the First Round. Donnelly took the opening frame, although that was the only time he was ever in front as he eventually went down 10-5.

It would be his only appearance there. As a result of his run he rose to a career high of number 29 in the world. In 1983 he achieved his best run in a ranking event with a Last 16 finish at the International Open.

​A bit like Donnelly's case, Tony Drago wasn't the first Maltese player to play at the Crucible, it was Paul Mifsud.

Mifsud was only a professional for two seasons, although was apparently only active in the first of them. He would later have a distinguished amateur career which included him winning the World Amateur Championship in 1985 and 1986.

In his debut season on the top tier he qualified for the Crucible after a trio of wins. Former winner Terry Griffiths was far too strong for him though on the main stage, coasting to a 10-2 victory.

Canada was a real powerhouse of the sport throughout the 80's with an array of players from across the Atlantic displaying their talents at the Crucible. Gollan featured towards the end of that golden era when earning a professional tour card for the 1989/1990 season.

In his maiden season as a pro he chalked up a number of wins and made the Last 16 of the UK Championship. He won five matches in qualifying for a debut in Sheffield; not many players have done that in their first season, I'm sure. Along the way he defeated Clive Everton, countryman Kirk Stevens and Eugene Hughes in the last round.

Brady was drawn to play former Runner-Up Doug Mountjoy. Despite leading after the first session, he eventually went down 10-8.

It would be Gollan's only appearance there. This is a little surprising given his good early form on the circuit. The following season he achieved his best finish in a major event; a semi-final at the 1991 European Open.

Shaun Mellish only ever appeared in the Last 32 of a ranking event once. That was in the 1993 World Championship.

​The Englishman, who reached a career high ranking of 85, came through five rounds of qualifying which culminated in a 10-4 victory against future champion Ken Doherty.

Willie Thorne put an end to his dream run when beating him 10-6 in Sheffield. The £8,000 he got for getting there was nearly half of his total career prize money.

Just like Mellish, Gill's only Last 32 finish in a professional ranking event came in the biggest event of them all.

Gill emerged through seven qualifying rounds to book his berth at the Crucible. However, his 'reward' was a daunting meeting with defending champion Stephen Hendry on the opening day.

Whilst Gill avoided completely being swept away, he did suffer a 10-1 bruising from the Scot.

Perhaps Pichit shouldn't be on this list; he is after all remembered for being the second Thai player to play at the Crucible Theatre behind James Wattana.

I did however feel I should pay tribute to him. He won eight matches in qualifying, originally starting off in Round 1 of it. Alex Higgins and Mike Hallett were among the players he eliminated along the way.

Again, it was Willie Thorne who put an end to it though with his 10-5 win in Sheffield. The Thai never made it again. A year previous to this he had beaten Stephen Hendry 5-2 in his home event of the Thailand Open during the peak of the Scot's powers.

During a career of 16 years, one of the three times Bedford reached the Last 32 of a ranking event was at the 1998 World Championship.

​The Yorkshireman, who was ranked 215 at the start of that particular campaign, navigated his way past a staggering nine rounds of qualifying. He booked his berth when defeating Gary Wilkinson 10-9 on the final pink.

For the biggest match of his life he drew, of all people, Steve Davis. Despite the enormous chasm in experience between the pair, the outsider more than held his own in the early and mid-stages. But it was the 6-time champion who broke away by winning the last 4 frames for a 10-6 success.

A bit like Pichit, I'm sure people remember Kristjan Helgason for being the first Icelander to ever (and since) exhibit his skills on snooker's toughest terrain.

​Helgason was part of the first championship this millennium. Amongst the five players he disposed of

​Stephen Lee was a step too far at the Crucible, though, going out 10-3.

​At the age of 34, on his 16th attempt, Irishman Delaney finally qualified for the Crucible.

​Those qualifying rounds were a story in itself. He came back from 5-1 down to beat Ian Preece 10-7, won the last 4 frames to oust Barry Pinches 10-9, and then survived another decider against Alan McManus in the last round.

​Heroics didn't come in Sheffield, though. A bad start saw him fall behind 5-0 to Matthew Stevens, eventually losing 10-2. He has never made it there again since.

A big thank you to cuetracker.net and snooker.org for their websites that continue to provide so much information on both past and present tournaments.