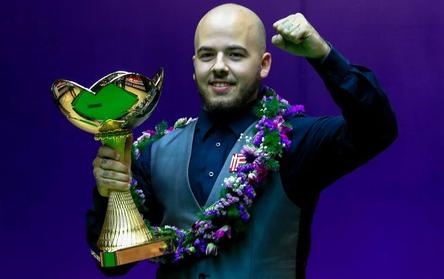 Tuesday 22nd August 2017 was a prosperous day for snooker, as 22 year old Luca Brecel became the first player from Continental Europe to win a professional ranking event. It came in the most lucrative ranking event ever to be held outside of the UK, and featured an all star cast.

Amongst his mission statements when he took over administration of the sport at the start of this decade, Barry Hearn promised to get the professionals playing in more events on TV, boost prize funds and showcase new talent. He has emphatically achieved all three.

Whilst there has been some talk in the recent past about the financial struggles of players in the lower levels of the rankings, the big rewards on offer are for all to see. 10 tournaments this campaign boast a top prize of at least £100,000, with many more not far behind.

​The earning potential can be massive. Mark Selby accumulated nearly 1 million pounds in the space of just 12 months last season.

Brecel's China Championship victory has changed his life and bank balance - all within a week. The £150,000 he pockets is over 5 times more than his previous biggest pay day for reaching the 2016 German Masters Final. When you include potential add on events that he can/will qualify for, he is pushing £200,000 as a minimum.

This is an opportunity for all. Brecel has emerged from the flat draw system, where all 128 players have to win seven matches for the title.

Brecel is the latest in a long line of maiden ranking event winners in the last couple of years.

With more events, there is obviously a larger likelyhood of new champions coming through, but the scale and palette of these new winners is very notable.

Since the start of the 2015/2016 season, there has been a regular stream of new faces lifting trophies.

Chinese teenage duo Zhou Yuelong and Yan Bingtao announced themselves on the main stage when they became shock winners of the World Cup in their home country.

A couple of months later Thepchayia Un-Nooh claimed the World 6 Red Championship and Kyren Wilson - then as the World Number 54, navigated 9 matches to become the 2015 Shanghai Masters Champion and one of the most unlikeliest winners in professional snooker history.

At the other end of the experience scale, Rory McLeod won an event carrying ranking points for the first time in his long career at the Ruhr Open in Germany; part of the now defunct European Tour.

Into the new year Martin Gould 'got the monkey off his back' when conquering the German Masters at the Tempodrom (defeating Brecel in the title match), whilst Finland's Robin Hull enjoyed a significant pay day by taking the Shootout where Brecel once more reached a final.

​More new winners were to come in 2016/17. Anthony McGill claimed a ranking double with the Indian Open and the newly upgraded Shootout, whilst popular duo Mark King and Anthony Hamilton achieved lifelong ambitions with ranking successes at the Northern Ireland Open and German Masters respectively.

A significant result in terms of snooker's development in China was Liang Wenbo's emotional triumph at the inaugural English Open. Liang, who upset Judd Trump in the final, became just the second player from his country to become a major ranking event champion.

This new 2017/2018 season has already seen two rookie winners in the first two ranking tournaments. A bit like a few of those mentioned earlier, Wales' Ryan Day notched up his first ranker with the Riga Masters in Latvia during June.

Brecel's victory on Tuesday changes the landscape of the sport once again. Questions such as 'Who is the best not to have won a ranking event yet?' and 'Who will be the next new champion?' are bound to resurface at some point soon.

With his elimination of World Champion and Number 1 Mark Selby in the Last 32, I felt it could have been Zhou Yuelong's breakthrough this week but his hopes were denied by Runner-Up Shaun Murphy in the Quarter-Finals.

Certainly the finger of suggestion points towards the exciting young Chinese trio of Zhou, Yan and Zhao Xintong, although slightly beneath the radar other names from the far east such as Xiao Guodong, Tian Pengfei and now Li Hang have reached the latter stages of ranking events. Thailand's Un-Nooh is another mentioned candidate.

Now looking at the rankings, (before the China Championship) though, only 4 members of the Top 32 are without a major ranking trophy to their name - David Gilbert, Michael Holt, Ben Woollaston and Zhou. Given their consistency and experience (perhaps not in the case of Zhou!), I would think one of those are most likely to be next in line for glory.

Written and published by Michael Day on the 22nd August 2017