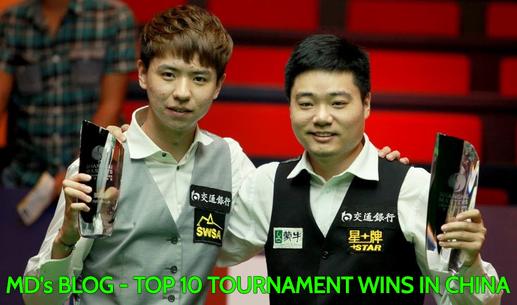 We're at the business end of proceedings in Yushan where only one of eight remaining players can lift the trophy and bank a cool £150,000 come Sunday.

With so much of the professional campaign focused around big money events in China nowadays, I thought I'd try and list the top 10 tournament wins in China of all time.

I'm not too sure what I'm basing this on, though, so I guess it depends on several factors such as excitement, shock value, standard, popularity and how big something felt. I'm sure a lot of people will have different opinions on this, but that's OK with me.

I've broken this list down into two episodes. This article is for those selected 10 to 6...

We're going to start the countdown with an invitational event, namely the 2010 Wuxi Classic that was played at the start of the season.

Before it was a full ranker, the 12-player tournament featured five entries from the host country, including Ding Junhui who was playing in front of his home crowd. Ding reached the final after convincing victories over Ryan Day (5-2) and Tian Pengfei (6-0).

However, Shaun Murphy would ultimately deny Ding's adoring following a happy ending. After crushing Stephen Hendry 5-1 and then defending champion Mark Allen 6-1, he would come back from 8-2 down in the final against Ding, chalking up seven frames in a row to record a remarkable recovery and a 9-8 win.

A happier outcome for Ding and the Chinese crowd came at the 2013 Shanghai Masters which would see the first ever all-Chinese ranking event final. Ding got the better of countryman and debut major finalist Xiao Guodong 10-6 in the historic title decider.

​It was a significant success for Ding; it marked his first major trophy in China for over 8 years and would be the start of his record-equaling season that saw him claim five major ranking titles.

He would go on to lift the Shanghai Masters for a second time in 2016.

Ah, The Force. The former World Champion rolled back the years at the 2012 China Open by  winning his first ranking title since the, well, um, 2009 China Open!

Ranked outside of the top 16 at the time and before the flat-draw system was introduced, Ebdon qualified for the venue with a 5-0 win over Liang Wenbo.

In Beijing he advanced through a very difficult draw which saw him eliminate Matthew Stevens, John Higgins (in a deciding frame), Neil Robertson and then Ding Junhui to reach the final.

He would then unleash his powers on 2008 winner Stephen Maguire - registering four centuries in a tense 10-9 glory.

It remains Ebdon’s last professional triumph to date, although it exhibits his longevity in the sport; his first of nine ranking wins was at the 1993 Grand Prix.

Mark Allen is synonymous with the 2012 World Open for the noises he made on and off the table during it.

Honest Allen talked of his 'displeasure' in regards the location and conditions of Haikou. Using Twitter he described, and stood by, a number of observations, although there was one Tweet he subsequently removed and apologised for later. (The tweets are still out there if you want to read them!)

Despite how he felt, on the table he produced the results. Ironically he went on to win the competition, thus securing his first major ranking event trophy in the process.

​The Northern Irishman came through two deciding frame finishes against Judd Trump and Mark Selby before destroying a resurgent Stephen Lee 10-1 in the final where he made a quartet of tons.

Perhaps Allen discovered an affection for the area, as twelve months later he would return to defend the title, albeit being at a different venue.

​Another player who fans had touted as a future tournament winner was Belgium's Luca Brecel. He realised some of that potential by winning the big money China Championship in 2017.

At the venue Brecel removed Marco Fu in the Last 32 and then had a memorable and emotional win over Ronnie O'Sullivan in the Quarter-Finals where he came back from 4-1 down to defeat the five-times World Champion on the colours in the decider. He then had another draining victory that went the distance against Li Hang in the Semi-Finals.

However, despite facing the experience of triple crown winner Shaun Murphy in the final, mental fatigue did not stop him from depositing his maiden trophy. Recovering from 3-1 down, Brecel notched up nine of the last eleven frames to record a 10-5 scoreline and the biggest accolade of his career so far.

Please come back next week when I reveal the top 5.

Article written and published on the 9th August 2018