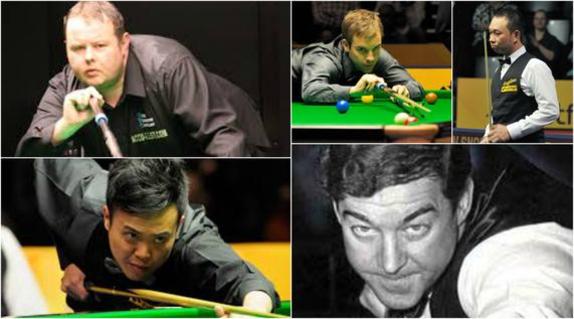 Who is the best player yet to (or who never did) win one of Snooker's Top 3 events?

I originally compiled this article the same time last year, so I thought I'd do an updated version.

However, besides being another year on, nothing has really changed. Mark Selby and Ronnie O'Sullivan were the only winners of the Triple Crown events in 2016 and 2017 – although with both being eliminated at the Alexandra Palace over the last few days that streak will be broken. Neil Robertson was the last to win a TC tournament except them (2015 UK Championship)

Winning a World Championship, Masters or UK is obviously extremely tough. The nature of these events means 'surprise winners' are few and far between.

You can have a successful and lucrative career without them but some players will expect to win one of these trophies, whilst others in the past may have been disappointed they never claimed one.

Let's look at the most high-profile players who make the list...

THE CURRENT CROP
There are a few very valid candidates in the draw of this week's Masters.

Number 7 seed Barry Hawkins is a three-time ranking event winner and has been to the final of the Worlds and Masters before – both times he was denied by O'Sullivan.

Marco Fu also has a trio of titles to his name, made the final of the UK and Masters, and has been on the wrong side of close TC Semi-Final encounters in the past.

Mark Allen is in the Semi-Finals of the Masters this weekend and could well take himself out of this discussion come Sunday evening. A hat-trick of ranking wins in the locker, his only TC event final was in 2011 at the UK.

Ali Carter, though, as a 4-time ranking event winner, trumps the rest and is statistically the most decorated player active on the circuit yet to claim one of the 'Big 3'. He has also played in snooker's biggest match at the Crucible twice before, but he too had his hopes ended by O'Sullivan.

Luca Brecel, Kyren Wilson and Anthony McGill have time on their side - all have been touted as major champions; Wilson is also in the Last 4 in London.

Liang Wenbo, who is a little bit further into his career, reached the 2015 UK Final, whilst 37-year-old Day has not played in a TC event final as yet.

FURTHER DOWN THE CURRENT RANKING LIST
Outside of those at the 2018 Masters you could look at former Shanghai, Wuxi and International Champion Ricky Walden.

Of these four, only Wattana (1993 Masters) has featured in a TC event final. At still just 26 years old, one would suggest White has a lot more time than the others.

Anthony Hamilton and Mark King finally secured their maiden ranking successes not so long ago and both spent healthy spells as established Top 16 players. Joe Perry and Martin Gould are also in a similar category, although Perry is the only one of the quartet to have made a TC event final (2017 Masters)

Former World Championship finalist Nigel Bond and former Masters finalist Fergal O'Brien are other ranking event winners still on tour. They have both been quite central on our TV screens too.

PLAYERS FROM THE PAST
With ranking events only really a thing since the mid 80's onwards, it may be unfair to decide it this way, but statistically the best player to have never won a TC trophy is Stephen Lee.

Lee's career was cut short because of a ban due to betting breaches but as a 5-times ranking event winner he is the most decorated. Undoubtedly, though, he under-performed in the 'Big 3' with the 2008 Masters being his only TC event final.

Former World Number 2 Tony Knowles was a dual champion, but never got into a TC tournament final. Knowles and Carter (who also reached Number 2) are the highest ranked players never to have lifted a UK, Masters or Worlds. Wattana, and another ranking event winner, Neal Foulds, were World Number 3s. Foulds did make a UK Final.

Charlton may be the highest profile of those – the Australian lost in two World Championship finals and six Semi-Finals.

Our next new winner of a Triple Crown title could come this weekend with (at the time of writing) Allen, Wilson and Day all still involved at the Alexandra Palace.

Maybe someone we haven't mentioned in the article will be the next new Champion, or perhaps it is someone not even on the tour yet...

Written and published by Michael Day on the 19th January 2018