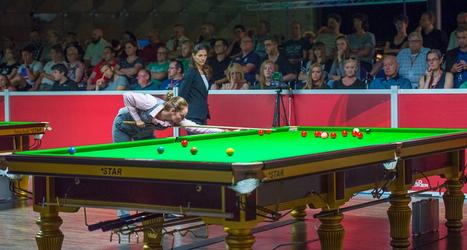 Well done to all those involved with the organisation, preparation and running of the recently completed Paul Hunter Women's Classic in Furth, Germany.

Just like during last year's inaugural edition, the Final was held in the Stadthalle arena alongside the Paul Hunter Classic (the Semis were hosted in the arena for the first time too). Note I didn't say 'Men's' event, as the Paul Hunter Classic is open to all, in fact Reanne Evans got through the amateur qualifying rounds and reached the Last 128 draw with the professionals.

This year's Women's event also had the added improvement of the final being streamed live on the Eurosport Player with the popular Neal Foulds commentating. Everything was professionally done and it is certainly another step in the right direction for Women's Snooker.

Given the positive vibes and publicity it received on Social Media, you could argue this will be the highest profile event on the Women's circuit this season.

This is the only opportunity the 'Female Only' events currently get to share the same limelight and conditions as the professional tour. Some may suggest this makes the Ladies event a 'sideshow', but I don't agree.

The WLBS tournament set up continues to improve, but all their other competitions are held in clubs - including the World Championship, which last season was held in a new venue in Singapore.

That move to Toa Payoh was an interesting one; a statement of intent in regards to making the sport global. It featured new names who hadn't played in it before and ended with an all Asian final for the first time ever.

However, the PHWC was competed in an arena on STAR Tables and in front of an enthusiastic crowd. It was a level playing field; exactly what the top lady players deserve.

So, why can't the Women players have a bigger slice of the cake more often?

In order to inspire and get new ladies into the sport, big names such as Reanne Evans, Ng On Yee and Wendy Jans need to be shown in competitive action on TV - or at least streamed properly.

Having features during the mid-session intervals on the BBC and a Ladies Day at the Crucible are certainly welcomed, but these players need to be shown in real action - else it is all hearsay in my opinion. The Ladies game needs to be seen as aspirational.

I remember a couple of decades ago the Ladies Circuit used to hold over the finals of events and play them in the same venue as the 'Men's' professional tournaments. I can also recall the Final of the World Championship being held at the Crucible and receiving some coverage from the BBC. Why can't this be done again?

What is stopping having the Final of the Women's UK, Masters or World Championships on the morning before the main final? There'd be little extra cost to the authorities as the stage would be in place - why not make it free for fans to watch, or add it as a bonus for those with afternoon tickets?

Again, some may say the Ladies event would be overshadowed, but once more I don't agree. Look at other major individual sporting events and you'll see both the boys and girls share the show. At Wimbledon Women play on Centre Court, at the Olympics they race on the same track, at the Lakeside they throw on the same oche.

I'm not saying all the Women's events should be concluded alongside the 'Men', but I believe the majors can.

Of course, I would be naive to say there isn't a gulf in class between the Professional and Women's circuit. We're so used to seeing big performances on the main tour by the star names, but some of the most compelling viewing is when it is dramatic.

A counter arguement to be made is that the Professional circuit is open to all - it is not exclusively a Men's Tour. Female players have the same avenues to reach the top tier - Evans and On Yee have won multiple matches at Q-School in recent attempts.

Maybe a little bit off topic, but why not invite certain Women players to TV events. What about offering the World Women's Champion a place into the Champion of Champions? How come On Yee wasn't given the opportunity to team up with Marco Fu for Hong Kong during the recent World Cup in China? The televised World Pool Masters and the PDC Grand Slam of Darts have invited female players before.

Those behind the scenes at World Ladies Billiards and Snooker work very hard and they have certainly boosted and progressed the discipline in the last few years. I wish them all the best for the future and a personal thank you to Matt Huart for his assistance.

Written and published by Michael Day on the 2nd September 2017