Potts' roots are firmly in English 8 Ball Pool. Coming through as a promising youngster, he fulfilled his potential by claiming a vast number of major accolades, most notably the WEPF World Championships he won in 2005, 2007 and 2008. He became the first player ever to successfully defend that World Title and also the first to lift the trophy on three different occasions.

The Englishman then crossed codes, switching to Blackball Rules and winning the inaugural IPA World Championship at the Lakeside in 2014.

That farewell victory would see him effectively retire from English 8 Ball, as he headed over to the Far East to play Chinese 8 Ball full time - one of the world's most progressive sports.

The transition to the bigger table has been very hard work, but nearly seamless. Competing at his first Chinese 8 Ball event, he amazingly took the 2013 JOY World Masters, and proved it was no fluke by retaining it in 2014.

Earlier this year he regained the championship to complete a hat-trick after winning a dramatic Penalty Shoot-Out style Tie Breaker in the final.

A lot of Gareth's time is now spent in China, but he kindly made space to talk to us here at The Cue View.

TCV - We know quite a lot about your English Pool roots and background, but how did you originally get involved with the world of Chinese 8 Ball Pool?

These were Darren Appleton, Chris Melling, Mick Hill, Ralf Souquet, Karen Corr, Stephen Hendry, Ken Doherty and myself. We would all join the Top 8 ranked Chinese players to make the 16 player bracket. It was Double Elimination with races to 13, although the final was race to 17.

At this time I had never played Chinese 8 Ball, nor had I even seen a Chinese 8 Ball table before. So I went to my cue guy and between us we developed my cue based on the research I'd done about the game and what we felt was needed to play it to the best of my ability.

This is the same cue, unaltered, that I still play with now. Before this, players either used a Snooker or an American Pool cue. I didn't think either was right for this discipline so we designed the cue that is now globally recognised as the 'Chinese 8 Ball cue'.

I flew out 5 days early to practise - at this point not even knowing the rules. Before the tournament the plan from JOY Billiards was that the international players would get a 2 frame start against the Chinese players.

However, after watching myself, Darren, Mick and Chris in the practise room, the Chinese players complained, so JOY changed it a few days before the tournament started. To be honest I was happy with this because I didn't want to win whilst receiving a start as this wouldn't feel right to me.

Two weeks later I defeated Chris Melling 17-9 in the final. A little after this I then signed a contract with JOY Billiards - which has just expired, although I am delighted to announce I have just resigned a 5-year contract with them which will mean I will still solely focus on Chinese 8 Ball."

​TCV - Chinese 8 Ball appears to be gaining more and more global interest, exposure and popularity. Could you describe how big it is in China in terms of people playing and watching it? I understand the prize money in the sport is also increasing?

​GP - "Over the last 5 years Chinese 8 Ball has shook the Cuesports world with its huge prize money, huge tournaments and huge coverage on live TV - and it is only growing.

The three main Cuesport disciplines in the world are Snooker, English Pool and American Pool. Chinese 8 Ball is the perfect hybrid of all 3 games.

So it's 8 Ball, played on 9ft by 5ft table, nap cloth, extremely tight 3 inch pockets and 2 1/4" American sized Pool balls, so therefore relating itself to every single player that has ever played any cue sports.

There are 70 million people that play Chinese 8 Ball in China including Stephen Hendry who has been signed with JOY Billiards playing and promoting it for the last 6 years.

There have been 5 main tournaments called the International Masters run by JOY Billiards, all with huge prize money and all live on China's main sports channel CCTV5.

A lot of the leading players from 9 Ball and English 8 Ball are now starting to make the transition.
When I won the Masters again this January there was a mind blowing 100 million people said to have watched the final live.

Star, JOY's rival table manufacturing company in China, have now introduced a Chinese 8 Ball World Championships in March with $200,000 to the winner. This sort of prize money is unheard of and is only matched by a handful of professional snooker tournaments.

​TCV - How do the Chinese fans react to you when you play over there? I have seen the fantastic support you get when competing; are they on your side when you play a 'home' player?

GP - "The support I now get over there is incredible - sometimes when I play matches against the top Chinese players it's like I'm the home player which is an incredible feeling and definitely helps a lot during matches."

​TCV - You have now won an incredible 3 JOY World Masters' in just 5 years. When you reclaimed the title earlier this year you certainly did it the hard way having come through a host of matches on the B Side - many of which were close or where you came back from a deficit. The final even went to a dramatic Tie-Breaker! Could you talk us through a few of the things you remember most about this year's event? Was it your biggest, or sweetest, victory to date in the discipline?

GP - "The third one was without doubt the hardest one to win because the format has now changed to a total of 64 players - the Top 32 Chinese and 32 international players, again played to Double Elimination.

Secondly the standard of the players is so much higher now than it was 5 years ago; especially the home players. The Top 8 play to a really high standard and in particular the Top 2 - Yang Fan and Zhang Yubo.

Yes, I was behind in 8 or 9 of the 11 matches I played. I think it was 8 straight wins through the B side to win, and I was 5-1 down in the Final. This was tough and also mentally draining hence the emotion at the end.

The first one still sticks with me as maybe the sweetest, but as I said the latest one was without the hardest."

In recent months we have heard you do a serious amount of commentary at the Bulldog Security Challenge and Supreme Pool Masters English 8 Ball events at the club you jointly own in Stoke on Trent. I understand the venue will be hosting more huge independent tournaments in the future too? Do you like doing commentary?

​GP - "Yes my club that I co-own with Lee Kendall will hold another huge event at the end of this month - the second Players Amateur Championship. The recently completed Supreme Pool Masters saw £10,000 going to the winner, which is an incredible amount for a club event and equals the top prize awarded in certain World Championships.

To be honest Lee and his team are behind it all - he puts a huge amount of work into them and it is amazing what he's created. He has a Facebook page for his tournaments where a lot of the information is (click here).

As for the commentary, I don't mind doing it. Sometimes I can be a bit critical, but I'm the type of person that says it how it is and how I see it."

​TCV - I know you get asked this question frequently, but is there any chance of you playing on the English 8 Ball main stage again, or is that chapter of your career now closed?

GP - "Other than the odd tournament at my club and a few exhibitions and coaching, I never even touch an English 8 Ball table any more.

I made the decision even before I won the first IPA World Championships in 2014 that I was finishing playing English 8 Ball.

The reason for this was because I'm an 'All or Nothing' sort of person and I knew in order for me to achieve what I wanted to and to get to the level I needed to at Chinese 8 Ball that I had I stop English Pool because it's not possible to mix the two and play both at the level I wanted. The contrast of absolutely everything between the two is too vast - the balls, the tables, the rules, the equipment;everything is the opposite.

I still love English 8 Ball, it's the game I first played and will always be my first love. I had some amazing times and wins at it, and made some of my closest friends through it. I still follow all the IPA stuff. It's the game that got me to where I am now and I'll never forget that or will I forget my roots, and that's English 8 Ball.

The one thing I miss the most is my friends from it. Yes, I still keep contact and see my close friends from English 8 Ball, but back then we were at a tournament almost every weekend and I definitely miss that side of it.

So would I ever go back - I don't think I ever could, especially after experiencing what I have in China. I have achieved what I wanted to at English 8 Ball and I now see Chinese 8 Ball as my future, and that is the new chapter and challenge.

As I said earlier, I have just resigned a new 5 year deal with JOY that will see me playing Chinese 8 Ball until at least 2022. I also have my own cue range out there which you can view and buy via Home Leisure Direct.

Home Leisure Direct and myself have just signed a deal with JOY to become the exclusive distributor of their tables, my cues and another really interesting product they produce called ipool. They are all now available to buy directly from Home Leisure Direct so please check out their website for details.

So with all of this going on I probably see the rest of my career playing Chinese 8 Ball, and simply that's where the money is. But who knows what will happen in the future. I'd definitely like to come back one day to promote or to organise English 8 Ball events, but that will be when I decide I can't pot the balls any more!"

I would like to thank Gareth for his time; I appreciate how occupied he is with the club, travelling and competing in tournaments.

Home Leisure Direct are an official sponsor of Gareth and they are also the exclusive supplier of JOY Billiards products and equipment in the UK.

​You can found out more about their range of tables here; stock is arriving in October but they are currently taking orders - there is also special pricing for orders of two or more.

If you'd like to see and perhaps even try out before you buy, their showroom in Bristol will have a table on display at the start of November which you are welcome to experience.

Written and published by Michael Day on the 8th September 2017 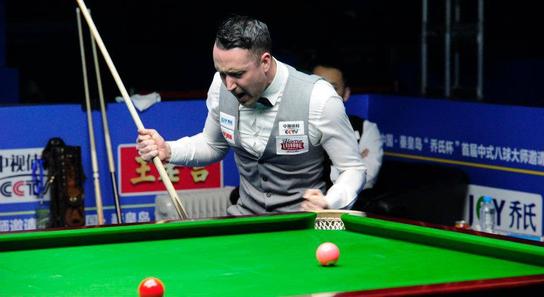