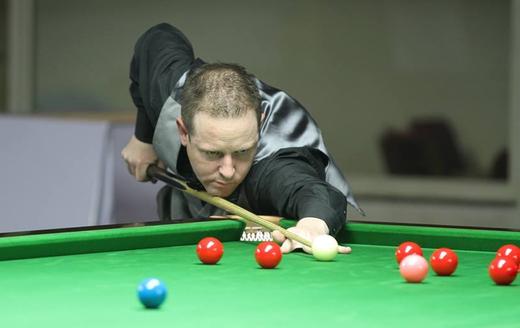 Multi talented Australian Matthew Bolton will realise a lifelong ambition when he makes his debut on the professional snooker circuit this upcoming season.

The 37 year old from Perth, Western Australia won the 2017 Oceania Continental Championship in February and was thus rewarded with a guaranteed two year World Snooker tour card. Former winners of that title include Neil Robertson and Dene O'Kane.

Bolton boasts an impressive resume of honours - in both Snooker and English Billiards. He is a 15 time winner of ranking events in his homeland, including the 2014 Australian National Snooker Championship; he has been the Number 1 ranked player since that year.

In the 3 ball discipline he has an even more dominant record. Already a 14 time national champion, he was the youngest ever player to claim the title at just 20. On the global scene he has 6 World Ranking honours to his name, and was Runner Up at the 2011 and 2012 World Championships. His consistency saw him become the World Number 1 in 2012/2013.

Matthew kindly took time out from his busy preparations to talk to us. Here is what we threw at him...


YELLOW BALL
TCV - Thank you for your time Matthew in talking to us here at 'The Cue View'.

Congratulations on winning the OCBS Oceania Snooker Championship! I believe you had won pretty much everything else on the scene 'Down Under' - you must be delighted?

How does it feel being the champion, and rewarded with the chance to compete on the sport's top tier?


MB - It's a great feeling to be given the chance to play at the highest level, and I can't wait to be part of it.  I had lost 2 finals and a semi final in the last 3 Oceania Championships, so I was very happy to get over the line this year and get the tour card.

It was the one tournament that had eluded me over the last 3 or 4 years, despite having a great run of success in many of the other National Ranking events in Australia.

I wasn't entirely sure if I would take the tour spot when I won the Oceania Championship, but the support and encouragement from my family and friends made the decision an easy one!


GREEN BALL
TCV - That leads me nicely onto this question then...

What are your plans in regards the professional circuit for the next 2 seasons? You join fellow countrymen Neil Robertson and Kurt Dunham in the ranks. Last year Kurt based himself here full-time; will you be following suit?

Either way this will be a life changing (and exciting) experience.


MB - I will be staying home in Perth, Western Australia for the first season and travelling for the events.  I will miss the first 2 events (Riga Open & China Championship), but plan on playing in nearly everything else.

I have a young family so it would be a huge decision to move over to the UK.  I have bought a Star table to practice on to give myself the best chance of performing well.  Obviously I will lack the quality match practice against other professionals here, but I will head over at least a week before my matches to get some top quality practice sessions in against some of the other players. Depending on how things go I may look at moving to the UK for my second season.

Neil and Kurt have been really supportive since I qualified, and it's great for Australian snooker to have 3 players on the main tour.


BROWN BALL
TCV - Do you have any short or long term targets for your professional career?


MB - I believe expectation creates unnecessary pressure, so my goal is to simply play every shot in every match to the best of my ability.  Results will take care of themselves and are just an end result of putting the hard work in on the practice table.

I don't believe anyone knows their true potential until they fully commit to something, and I'm very excited that I have the opportunity to fully commit to snooker and see where it takes me.


BLUE BALL
TCV - A lot of people may know you better as one of the World's best Billiards players. Will you be competing in 3 ball events whilst you're over in the UK too?

MB - I may play in the World Championships in Leeds in October if I don't qualify for the International Championship at the end of October in China, but I won't be playing any other events.

I have the National Billiards and Australian Open (WBL World Ranking event) coming up in a few weeks in Melbourne, but that will be the end of the billiards for a while.

I will never stop the billiards completely as I love the game and learned to play at the age of 6. Both my father and grandfather were Western Australian Champions, so the sport has a great history in our family which I want to continue.  I still have ambitions to win a World Championship having been a runner up twice before.  I will still have a hit occasionally in practice as I think it is great for your touch and teaches you a lot about playing with side.


PINK BALL
TCV - You are part of a proud Cuesport history 'Down Under'. What is the current state of snooker in Australia and the Oceania region as a whole at the minute?

How popular is it in terms of TV viewers and people taking part? Surely Neil Robertson's success is an inspiration?


MB - The amateur circuit in Australia is excellent compared with most countries around the world.  We have about 12 National Ranking tournaments each year with prize money ranging from $8,000 to $17,000 in each event.  The number of entries varies from about 40 to 100. There are about 400 players on our national ranking list.  From last year we also have a Ranking Finals event for the top 10 players in Australia which is $12,000 winner takes all.  This is a great initiative and we are very fortunate that Chris Christofi from Reventon Group sponsors this event to make it possible.  The Reventon Group are a huge supporter of the game in Australia.

There is a struggle to keep tables in venues, but we have some great clubs around the country that support the game as much as they can and host some great events.  I feel the development of junior players in Australia is something that needs urgent attention for the future of the game.  We have nowhere near the numbers and quality of young players that we did 15-20 years ago.

Neil Robertson's success is certainly an inspiration for many players, but I'm not sure that his success has been utilized as much as it could have, and should have, to promote the game and encourage our young players.  Neil is without doubt the greatest player this country has ever produced, however he is not really a "house hold" name in Australian sport - which he should be.

The TV coverage in Australia is very minimal.  We get no live TV whatsoever, and just some highlight packages of the major events a few months after they have been played.  When Australia had the Goldfields Open professional tournament it was broadcast live on TV every day, and it created a lot of interest in the game.  It would be fantastic if Australia could get back to hosting a tour event.  I'm sure it can be done, and if it was held at somewhere like Crown Casino in Melbourne or Sydney, the crowds and atmosphere would be fantastic.


​BLACK BALL
TCV - Where do you think snooker will be in 10 years time? What do you think the main differences will be?

MB - Hopefully the rewards for professional players will continue to grow over the next 10 years like they have in recent years. Barry Hearn has obviously turned the sport around completely from where it was not so long ago, and if that growth continues it's certainly very exciting times.

It would be great if all professional players could make some sort of decent living, because despite the growth, the lowly ranked players still can't make enough to get by. I think there are a lot of top amateurs and young players around the world who will never reach their potential unless they know they can make a living if they qualify for the tour.

If the sport can get into the Olympics this will obviously provide NGB's (National Governing Bodies) with a massive boost in funding from their governments, and this could really see the game flourish from the amateur level right through to the professional level.

It goes without saying that the Chinese will continue to impact the professional tour more and more, and the investment in the game in China is very exciting. Hopefully all players on the tour will reap the benefits of this at some stage.


I'd like to once again say a big thank you to Matthew for his time and sharing his thoughts and views with us. It certainly sounds like he will be very busy these next two years, but the excitement and his clear enthusiasm will surely help him through!

Having been so consistent in Australia and Oceania for such a prolonged period, his professional invitation is richly deserved.

Be sure to keep an eye out for him when he begins his rookie season at the start of August for Indian Open, Shanghai & European Masters Qualifying.


Written and published by Michael Day on the 19th May 2017