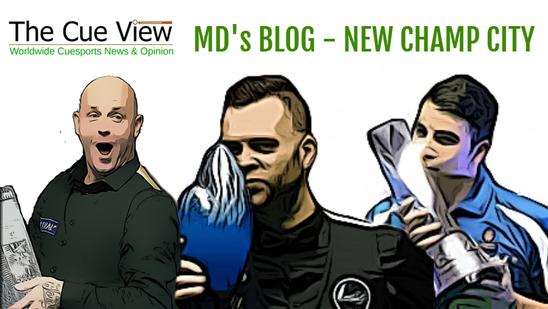 ​European Masters winner Jimmy Robertson is the latest new ranking champion on the professional circuit following his success in Lommel, Belgium last weekend. Jack Lisowski and David Gilbert have both reached finals this term too, but Robertson is the first maiden victor of the 2018/19 season.

When Barry Hearn took control of the sport at the start of the decade, he promised to create more opportunities for all the players. He had the ambition of getting new faces into the main arenas, on TV and becoming famous. He wanted to create new stars.

With a boom of events this decade, there is considerably more prize money available and the players have more chances to fulfill lifelong dreams. In his post-match interview Robertson talked about how he had dreamed becoming a champion since he was young.

Over the last few seasons some of the most gripping, emotional and joyous action to watch has been where a player won their first ever ranking event.

Let's have a look back at this decade under the Hearn administration and see who broke their duck.

​(I am starting this list from the 2010/11 season when Barry and his team were able to make an impact on the circuit's structure. In what has been a hot topic at times over the last few months, I am not going to include PTC, European Tour or Asian Tour events as they are widely recognised as 'minor-ranking' events, despite prize money earned at the time contributing towards world rankings).

Judd Trump was the only new winner this campaign when he finally made his big breakthrough with victory at the China Open in Beijing. Culminating in a final victory against Mark Selby, Trump had been touted for top level success ever since he was a pre-teen.

Immediately after this Trump reached the World Championship final where he lost out to John Higgins. He has won a further seven rankers since then, including the 2011 UK Championship. A permanent fixture in the world's elite from that point, Trump briefly held the World Number 1 spot for a few weeks at the end of 2012.

One of those to have really benefited from the new era of snooker is Stuart Bingham, who at the age of 35 collected his first major at the Australian Open in 2011. A hard-working professional who was upwardly mobile in the rankings with the new busy schedule, Bingham went on to claim the biggest prize of them all at the Crucible in 2015.

Considering his profile at the time, Mark Allen was overdue a major trophy breakthrough. He got that monkey of his back when he triumphed at the 2012 World Open in China, a title he defended the following year. The Northern Irishman is the current Masters Champion.

Now one of the most consistent and hardest players to defeat on the scene, Barry Hawkins' first big ranking win was also Down Under at the 2012 Australian Open. The season before he tasted glory live in front of the cameras at the Shootout (at that point an invitational). In a similar vein to Bingham, Hawkins had been a well respected professional for some time before his win; the era of more events appeared to help him step up to a new level.

There were no new ranking champions here, although it was a season where Ding Junhui (5) won nearly half of those on offer.

There were back-to-back new ranking champions in the second half of this season with Michael White and Joe Perry.

Welshman White had shown glimpses of his potential, but he was largely stuck against the same glass ceiling of mid tournament finishes. White actually won consecutive tournaments this year. His first being the Shootout (still invitational at this point) which included a dramatic final win in the last few seconds against Xiao Guodong. Straight away he backed this up with a stunning Indian Open ranking victory where he defeated fellow countryman Mark Williams in the Semi-Finals and then Ricky Walden, 5-0, in the final, during the same day. Like Hawkins, although unconventional, perhaps the Shootout win gave him some self belief, confidence and education on how to become a champion?

Perry had been an appreciated member of the top 16 for several years, but trophy success had eluded him. However, that changed in Thailand when he got his just rewards at the 2015 Players Tour Championship Grand Finals. Trailing 3-0 to Williams in the final, Perry may have thought another opportunity had been missed, but in a terrific turnaround he chalked up four frames on the spin to record a memorable victory.

​In one of Snooker's all-time greatest fairy tales, World Number 54 Kyren Wilson went through nine rounds of matches to win the 2015 Shanghai Masters. On his way to the title he held his nerve to eliminate home hero Ding Junhui (Quarter-Finals) and Judd Trump (Final) in deciding frames. Wilson is now one of the sport's hottest properties.

Martin Gould was already a trophy winner with triumphs at the unorthodox Power Snooker, Shootout and Championship League. He had also previously been a member of the world's top 16, but had yet secured a ranking trophy. That changed, though, when he was the last player standing at the 2016 German Masters.

There was a spike in the number of full ranking events this season due to the European and Asian Tours ceasing to exist. This perhaps contributed to there being a quartet of new champions.

Anthony McGill had already raised his profile with a couple of seriously impressive wins at the Crucible in recent times, so his Indian Open victory may not have been that unexpected.

Liang Wenbo became the second Chinese player in history to achieve ranking success status at the English Open with an excitable outcome over Trump in the final.

Elsewhere in the new Home Nations Series, tour stalwart Mark King finally had his moment to savour with an entertaining and emotional win at the Northern Ireland Open.

Another player to deservedly taste glory was Anthony Hamilton, who like King, had lost in multiple finals during his career before. Incredibly, Hamilton merely held onto his pro tour card the season before. His results in the first half of the season had been very good, and had he not unforced a foul during his semi-final deciding frame loss to Hawkins, it may have been Hamilton who won King's Northern Ireland Open.

This was forgotten, though, a few months later when he came from behind to overhaul Ali Carter in the final of the 2017 German Masters.

​Day had been to four major finals previously, but he made it fifth time lucky at the 2018 Riga Masters in the summer. With a taste for trophies, later on in the campaign he also won the Gibraltar Open and invitational Romanian Masters.

We all knew about Brecel's talent and most thought it would be a matter of time until he wore a ranking title. Those predictions came to fruition with an explosive performance at the 2017 China Championship where he defeated Ronnie O'Sullivan and Shaun Murphy on route to the trophy.

Georgiou kept his cool under the time pressures of the Shootout. Showing a maturity that not many had seen from him on TV before, the Cypriot ultimately ousted Graeme Dott on the final pink in a thrilling climax.

If we look at these eight completed seasons collectively, 100 major ranking events were played, from which 15 new, first time champions emerged - giving us a 15% strike rate in this period.

As a comparison, I looked at the eight previous seasons before this. Now, obviously there were far less tournaments and less players on the circuit with the current tour size of 128 (plus wildcards) being introduced as one of Hearn's changes.

​In between the seasons 2002/03 to 2009/10 there were 11 maiden ranking event winners; Chris Small, David Gray, Matthew Stevens, Ding Junhui, Shaun Murphy, Graeme Dott, Neil Robertson, Marco Fu, Mark Selby, Ricky Walden and Ali Carter - quite an impressive list. Just like the more recent period we looked at, there was only one season out of the eight where there were no new champions.

There were only 58 ranking events in these eight years, compared to 100 offered in the following eight. As a percentage though, 11 in 58 equates to a 18.96% strike rate, marginally more.

As you can see by the numbers, Hearn has kept his promises (and then some) in regards opportunity. More tournaments have predictably yielded more new faces lifting trophies and achieving career long and life long ambitions and dreams.

In terms of whether it is easier for someone to make a breakthrough now, if you base it on the strike rates previously mentioned, I don't know.

Factors and variables include:

- Numbers of professionals have increased from 96 to 128 (plus), so more players vying for trophies.

- Not all the top players enter all the events (some a lot more often than others!)

- Many events are played to shorter formats, in theory giving less likely players more of a chance?

​- Apart from the World Championship, all ranking events are now played as flat draws, rather than a tiered system. All players, regardless of ranking, have to come through the same amount of rounds now.

Naturally, you are going to get new players coming through regardless of the system, era etc, but should we be seeing more new champions making breakthroughs when you consider the changes to the sport?

Of course, you need to factor in the supremacy and longevity of the 'older' generations such as the well documented 'Class of 92' who are still gulping up big titles. Last season alone half the rankings titles on offer went to Ronnie O'Sullivan (5), Mark Williams (3) and John Higgins (2).

Three-times a World Champion in four years, Mark Selby has been a dominant force too - he has been World Number 1 for the majority of the decade so far.

Bottom line, though, is that we are seeing more new champions in this era of the sport. World Snooker supremo and dream maker Hearn promised more opportunities and he has delivered.

Had I taken into consideration all the other non-major rankings events, there would be a lot more names added to the list. Whilst those particular players don't have a major ranking asterisk to their name, they too have had the experience of winning a professional competition.

​Images above are courtesy of World Snooker