​​NÜSSLE IS AWESOME IN AUSTRIA AGAIN

Held at the BLZ Vienna, this 24-player event was the concluding chapter to the 2018 domestic campaign.

Automatically seeded into the last 16, Nüssle destroyed his opposition as he advanced to the final without dropping a single frame.

The 17-year-old defending champion defeated Bernhard Wallner, Jérôme Liedtke and then Mario Bodlas, each by 4-0 scorelines. During the last frame of his quarter-final success against Liedtke he compiled a break of 111 - this would be the highest across the weekend.

Nüssle was surely braced for a far sterner examination in the final as he faced former three-time champion Andreas Ploner. It would be a repeat of the previous year's title decider.

Ploner, who reached the last 16 of a Q-School event in 2018, waived just one frame in three matches as he progressed through the field.

The best-of-nine frames final saw Nüssle take an early 2-0 lead, but breaks of 48, 74 and 50 helped Ploner draw level at the mid-session interval.

Efforts of 40 and 62 aided Nüssle's response as he re-established a two frame cushion to move one away, although Ploner returned again (47 break, frame 7) to force a decider.

However, Nüssle resisted his opponent once more, claiming the ninth frame 74-0 to retain the title and secure a trio of career wins in Austrian snooker's most prestigious tournament.

The following weekend at the Köö 7 Snooker Club, also in the capital city, Stephanie Doležal won her second Austrian National Women's Snooker Championship - ten years on from her first.

Both events were run by the ÖSBV, the Austrian Snooker & Billiards Federation.

The picture above is courtesy of Claudia Nüssle. 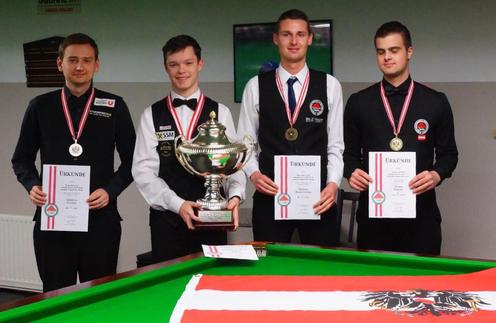