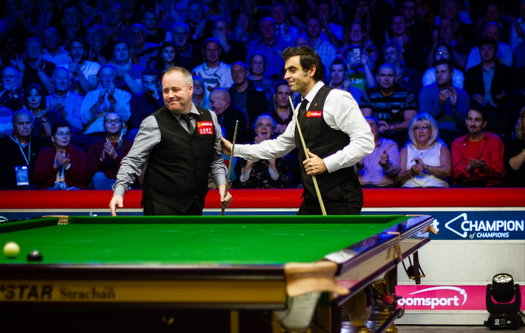 John Higgins' latest victory yesterday at the Champion of Champion was over 22 years on from his first professional title; the 1994 Grand Prix. A testament to his longevity on snooker's top tier.

Putting this into context, the great Stephen Hendry had a span of 18 years between his first and last titles, whilst Steve Davis' 1997 Masters glory was 17 years on from him lifting the 1980 UK Championship.

Peter Ebdon and Jimmy White actually have had longer time lapses with 19 and 20 years respectively, but Higgins' only parallel in this stat is Ronnie O'Sullivan, who has a gap of 23 years.

However, unlike Hendry, Davis, White and Ebdon when they claimed their last honours; Higgins and O'Sullivan are still pretty much at the top of their games, and likely candidates to win silverware whatever they enter. O'Sullivan is still the bookmakers favourite; the same can't be said of Hendry and Davis at that age.

Both have now passed 40, but both are still in the World's Top 16 and consistent.

​In just over the last 18 months, Higgins has bagged five major titles, including two in the last fortnight - a distinguished feat in the modern era, even if there were only 16 players in each comp.

Saturday was O'Sullivan's third consecutive final defeat in 2016 if you also take into consideration the Championship League. He did claim a sixth Masters crown in January, though, and followed it up with another Welsh Open.

With nine World Championships between them, Ronnie and John have been the ultimate warriors since the new millennium; and there is no sign of them slowing down or stopping.

We're often told how competitive the tour is nowadays...players further down the ranking list can knock in century after century after century. Like this week on ITV4 (great coverage by the way) we are also reminded how the pocket cuts are tighter compared to the 80's and 90's (although I think that is tempered with nicer conditions, ie - faster and more reactive cloths etc).

These factors make O'Sullivan and Higgins' achievements and longevity in the game even more remarkable. It is very difficult when discussing the greatest of all time (what does it even mean?) because of the different variables, but they are certainly lasting longer, and almost certainly in a tougher era.

Stephen Hendry is statistically the greatest player ever. No one can doubt how he took the sport to another level. Hendry sustained a supreme dominance, but on the whole, this was only really over a decade. All of his 18 triple crown trophies were won between 1989-1999. Come 2000, titles started to dry up for him.

No doubt both 'The Wizard' and 'The Rocket' have dipped in and out of form during their careers (O'Sullivan certainly more dramatically) - each have also been on the cusp of falling outside the World's elite in recent years. Again, testament to their resilience and determination.

Yet the roller-coaster for both still remains upwards. As well as seeing off and outlasting players from their generation, they are now mixing it with (and getting the better of) players from this current crop.

How much longer can they stay at the forefront of snooker?

Written and published by Michael Day on the 13th November 2016