​The 2019 Supreme Pool Series Grand Final takes place this weekend at the Players Pool and Snooker Lounge with several of the world’s top players from the UK and beyond aiming to collect the prestigious title and a cool £7,000 top prize.

This is the fifth and final event of the campaign at the renowned Newcastle-under-Lyme venue; the previous four tournaments throughout the year yielding four different winners. Unpredictable and competitive, a catalogue of contenders go into this tournament fancying their chances. Working off the 2019 Supreme Pool Series ranking list, the grand final draw is initially seeded, although the normal double elimination format remains with the eight undefeated qualifiers from the winners section meeting eight from the losers side in the last 16 straight knockouts.

​Fresh from media duties at the recent Mosconi Cup in Las Vegas, Karl Boyes returns to the baize habitat himself as the number one ranked player on this year’s series. The multi-talented Blackpool cueist has enjoyed a fantastic term, winning event two’s Supreme Masters and then following up with a runner-up finish in the event three Strachan Cup. First up, Boyes faces either Ameur Rias or Jaouad Tabit, who meet in an all-Moroccan preliminary round affair. Should he get through that, he could cross cues with 2018 Grand Finals winner and number one player Liam Dunster.

The last player to taste success in this arena was number two seed Clint I’Anson after he dramatically claimed the Central Vehicle Leasing Challenge title in September. ‘Mowgli’ awaits the winner of either Oussama Masskini or Luke Gilbert in the last 64. Northern Irish hotshot Declan Brennan will be looking to bookend his season after conquered the curtain-raising Liberty Games Open in April, starting with an interesting tie against either former professional snooker player Chris Totten or Gavin Robinson. Meanwhile, former WEPF World Champion Adam Davis, who stopped Boyes’ bid for back-to-back trophies in the Strachan Cup final, plays either Australia’s Steve Jamieson or England’s David McNamara.

A plethora of major champions can also be found in the star-studded draw, including two-time Supreme Pool Series event winner and current BI World Champion Scott Gillespie, who may meet former IPA World Champion Craig Marsh in winners round two. Another two-time SPS event victor with a world title to his name who will be present is the evergreen Phil Harrison; a 7/1 pre-tournament joint favourite along with Dunster. Chris Melling and Mark Boyle - fresh from a huge money match victory last week - are just two of the further tasty names in action on the menu.​ 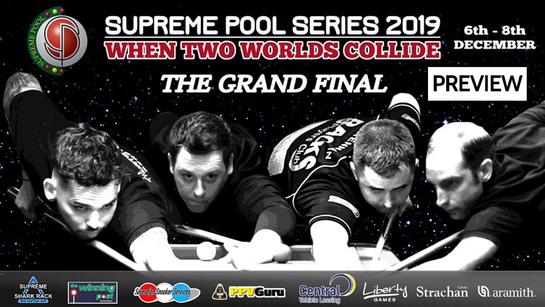 Throughout the tournament Beard Productions will be bringing you dedicated and free live stream coverage of up to four tables from every session.  Please visit the Supreme Pool Series' official website www.playerspoolevents.com for further information. ​