​Proceedings started slowly for Ridley, who only just managed to qualify from his Round Robin Group with two victories from four matches, although he produced the goods when it mattered come the Knock-Out phase.

​The Victorian held his nerve with deciding frame wins over Alex Pace and Ben Foster in the Last 32 and 16 respectively, before comfortable successes against Alex McCarthy and Joe Minici in the Quarters and Semis. Minici was going for a unique double, having claimed the Billiards Championship here a few days previously.

In the final Ridley faced fellow countryman Dennis Paul, who was undefeated throughout the event. A predictably close final ensued with never more than a frame between the pair up until 5-4.

Paul looked as if he had taken the tie to a decider when potting the brown in Frame 10 to leave his opponent needing a snooker. However, a snooker on the blue from Ridley - which Paul failed to escape from, meant the frame went back in the balance. After some exchanges, Ridley cleared from blue to black for the title with a 6-4 win.

Ridley has been one of Australia's most consistent performers over the years; he is also the reigning National Amateur Champion.

Picture above is courtesy of the Australian Billiards and Snooker Council 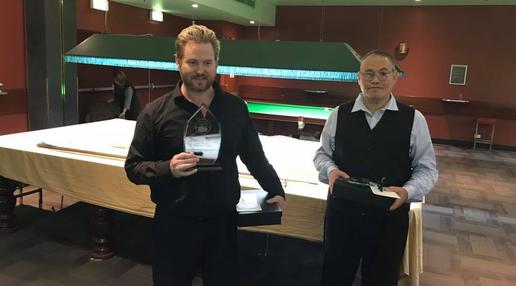