On the 28th November 1993, Ronnie O'Sullivan burst onto the professional scene by winning the UK Championship as a teenager. Yesterday, now into his Forties, ​he claimed the 2017 Masters title - a span of nearly 23 years and 2 months between his first 'Triple Crown' major and his latest.

Such is the respect given, 41 year old O'Sullivan predictably began this year's Masters as the pre-tournament favourite once again. This was despite being on an 11 month 'barren spell' without lifting a trophy, and having lost in four final appearances since.

Truth be told, Ronnie only occasionally ventured into his 'A' game at the Ally Pally this year. A shocking miss on match ball black by Liang Wenbo let him off the hook on the opening day, whilst he also had a fair few slices of luck in his Quarter-Final win over Neil Robertson.

Overcoming tip troubles early on, he put together easily his best display of the week against the in-form Marco Fu; a player who looked as if he had his name on the trophy. First-time finalist Joe Perry put up a spirited and hearty performance, but will rue unforced errors and missed opportunities that could have changed the outcome.

Much had been discussed during the BBC's coverage last week about the three major championships that snooker has (Worlds, Masters, UK) and comparing them to other sporting equivalents. This was O'Sullivan's 7th Masters title, putting him clear of Stephen Hendry's 6 and therefore making him the most successful player in the history of this elite tournament.

This, for me, could be where Ronnie's future date with destiny lays. He has already eclipsed Hendry's all-time 147 and Centuries Records, but it is major silverware where he will be truly judged. Looking at combined numbers, Stephen Hendry won 18 Triple Crown trophies; Ronnie O'Sullivan is now just one behind on 17.

However, unlike Golf and Tennis where they have pretty much 4 major championships of equal importance, Snooker's 'Jewel in the Crown' is undoubtedly the World Championship - an area where 'The Rocket' still comes up a couple short of 'The King of the Crucible'.

One fact that cannot be denied, though, is O'Sullivan's supreme longevity in the sport.

Steve Davis dominated the 80's, Hendry the 90's, but it is hard to point out which era (if any) O'Sullivan has specifically dominated. The figures say his accolades have been spread right across his career.

Davis and Hendry are different as they had bruising, sustained success mainly within their respective decades.

Once again using the pinnacle championships as the guide, Davis won his first (the UK Championship) in 1980 and his last (The Masters) in 1997 - a span of 16 years and 2 months. Perhaps this figure is slightly distorted, though, as his '97 win (coincidentally against O'Sullivan in the final) came as a shock; nearly 8 years on from his previous win at the 1989 Worlds.

Hendry's top honours reign is even shorter than that. His first was at the 1989 Masters and his last being the 1999 World Championship; a gap of 10 years and 3 months.

Of course, O'Sullivan's career has been plagued with inconsistency and long spells without silverware, but the fact is he has outlasted many of his peers and different generations. The exception would be close rivals John Higgins and Mark Williams (also from that golden early 90's era), but even a number of their stats don't come close either.

If anything, ROS has been stronger in the big events within the last decade. During the last 10 years, this is where he has bagged 2 of his UKs, 3 of his Worlds and 4 of his Masters. This is in stark contrast to Davis and Hendry when they were in their Thirties.

His well documented approach to fitness, and close work with Dr. Steve Peters have put him in a good position to withstand the sands of time.

I don't believe for one second that Ronnie doesn't care about breaking records and setting new benchmarks. Since his general upturn in form from early 2012 (when he was about to fall outside the Top 16), he has achieved so much that other records are on the horizon.

I guess the real big one is overhauling the 7 World Championships. If he is to do that, I suspect he would probably need to win this Spring.

What other records do you think Ronnie can take?

Written and published by Michael Day on the 23rd January 2017 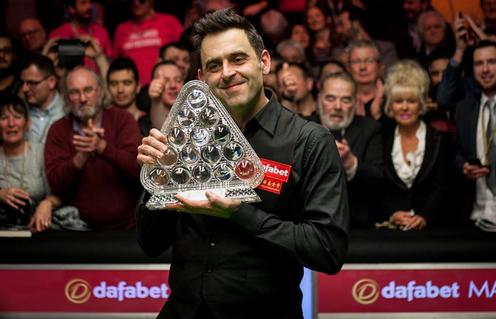