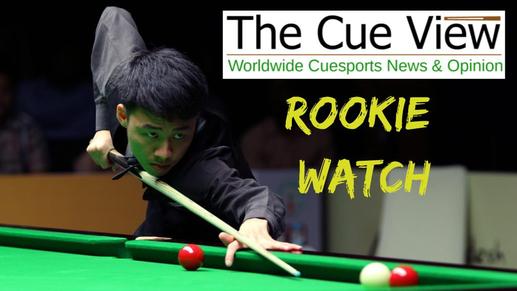 There are 12 players making their professional debuts on the World Snooker circuit this season.

Every one of them earned top tier status having been successful in major amateur events; whether that be via continental, worldwide, age categorised tournaments or the Q-School.

However, the jump from being amateur to professional is very big. This is now a way of life, they'll be up against some of the sport's biggest and most experienced names - it can be unforgiving.

Throughout the season we'll periodically take a look at how they're doing. Each of them have a guaranteed two year tour card, so will not be relegated regardless of what happens, but it will be interested to see how they settle in.

A few tournaments have passed since we first checked up on them. To read Part 1, click here. For those who have had visa issues, I have not included these in their stats.

Matthew Bolton (Australia)
Played 5 (Won 0 / Lost 5)
2017 Oceania Champion Bolton has found the top tier tough so far, although there have been small signs of self-proclaimed improvement.

Currently travelling to and from Australia, he lost to now amateur Barry Pinches 4-3 at the Paul Hunter Classic after leading 3-1 in August.

Last week Shaun Murphy defeated him 6-0 in International Championship qualifying, although a couple of frames went deep into the colours.

Castle has been one of the most talked about players this week following his Last 16 appearance at the European Masters.

All 3 of his pro wins so far came in this event. He defeated Jimmy White in Preston qualifying and then saw off Martin Gould and Aditya Mehta at the venue - all three matches were won in deciders.

However he couldn't produce another seventh frame victory on Thursday, narrowly going out to Cao Yupeng. Despite this, the £6,000 prize money will surely be handy.

Elsewhere he was also just squeezed out 6-5 by former champion Ricky Walden in IC qualifying (was 5-3 up) and at the Paul Hunter Classic he lost his opening game to Jamie Jones 4-2.

Chen has had a solid start picking up wins in 3 separate tournaments - the Riga Masters, China Championship and Euro Masters.

Having made the CC, he was ousted 5-4 by countryman Zhou Yuelong 5-4 in the Last 64. In Lommel this week he upset reigning Northern Irish Open Champion Mark King 4-2 before losing to Dave Gilbert 4-1 in the L32.

Played 0
Current African Champion and sole representative of the continent, Eltahhan has only featured at the invitational World Cup so far.

Ashley Hugill (England)
Played 7 (Won 1 / Lost 6)
Q-School graduate Hugill has not won since we last checked in on him.

Having qualified for India after a victory over Mitchell Mann, he lost 4-1 to then defending champion Anthony McGill in Vishakhapatnam. At the PHC he was eliminated 4-2 by Noppon Saengkham.

Hugill will be China bound at the end of the month for the International Championship as his match with Mark Selby has been held over to the venue.

Lukas Kleckers (Germany)
Played 8 (Won 1 / Lost 7) - he also received a walkover in Riga Round 1, not included in stats.
Kleckers announced himself when knocking out then reigning champion Neil Robertson at the Riga Masters on TV in only his second match as a professional. Since then, though, he hasn't recorded another win.

At the PHC in his home country he bowed out to amateur Joe O'Connor 4-2 and in IC qualifiers he lost to Jack Lisowski 6-2.

After presumably having some visa issues to start with, Li has recorded a brace of wins and can look forward to a trip home later this month following a 6-4 success over Sam Baird in Preston last week.

Li made a name for himself earlier on this campaign when coming back from 3-0 down to eliminate Stephen Maguire 4-3 on a re-spotted black in EM qualifying. In Lommel he lost 4-1 to Lisowski.

Niu Zhuang (China)
Played 6 (Won 2 / Lost 4)
Niu has made a good start to his pro career. Since our last check in, he has had it tough losing to Ding Junhui and Mark Allen at the venue stages of the China Championship and Indian Open respectively.

However, last week in Preston he recorded a very fine victory over the improving Saengkham 6-4 to qualify for the International Championship back in his home land.

Chris Totten (Scotland)
Played 7 (Won 0 / Lost 7)
It is tough at the top and European Amateur Champion Totten is finding this out.

Since our last review of him at the summer qualifiers, he has lost to second season pro Jamie Barrett 4-2 in Furth.

The teenager has been very unfortunate to draw Judd Trump twice, losing to him 6-0 in IC qualifying and 4-0 in a heldover match at the European Masters in the space of 4 days.

Played 7 (Won 2 / Lost 5)
It's been a strange few months for current IBSF World Amateur Champion Vahedi, who surely is one of the most travelled players this term so far.

Away from the ranking events, he has competed at both the World Games and Asian Indoor Games (winning medals in both) as well as the World Cup for Iran alongside Hossein Vafaei.

Unfortunately, like his countryman has suffered from in the past, visa issues have hampered his progression and ability to compete on tour.

He had to withdraw from the Paul Hunter Classic in Germany and having qualified for the European Masters in Belgium, he had to give Last 64 opponent Joe Perry a walkover.

He was able to travel for the Indian Open that he reached but was narrowly eliminated by Zhang Anda 4-3.

Back in this country, he lost out in a decider to the in-form Li Hang 6-5 in International Championship Qualifying when he led 5-2. During that match he made his first century break as a professional.

​Played 12 (Won 5 / Lost 7)
Xu (pictured above) has entered and appeared at all the ranking events so far. He has won in just one of them, but what an amazing run he had.

Having qualified for the Indian Open after seeing off Michael Georgiou in the UK a couple of months ago, at the venue he defeated Robin Hull, Sean O'Sullivan, Ricky Walden and Dave Gilbert before losing to eventual winner John Higgins in the Semi-Finals.

Elsewhere he has gone winless, but the £15,000 he banked in India has put him on a strong basis moving forwards.

Yuan Sijun (China)
Played 7 (Won 1 /Lost 6)
Since our first look at him, this year's Asian Under 21 Champion entered the PHC but withdrew, he also lost to Rob Milkins 6-4 in IC Qualifying after leading 3-1 at the mid-session interval.

He qualified for the European Masters in Belgium following success over Allan Taylor at the start of August (mentioned in Part 1), however he was stopped by Alan McManus 4-1 in Belgium.

The picture above is courtesy of the WPBSA.

Written and published by Michael Day on the 5th October 2017​​