NOSKO TO THE MAX!

Organised and staged by the Independent Pool Company, this innovative tournament featured 64 0f the best amateurs and lower ranked professionals currently in the UK; all four Home Nations were represented throughout the long weekend.

The unique format consisted of two 64 player single elimination Knock-Out competitions with the winners of each culminating in a Grand Final.

Westcountrian Nosko reached the latter stages of the 'A' Event after wins over England International Adam Brown 11-8, Myles Deleuse 11-5 and then holding his nerve to beat Steve Wall in a decider 11-10.

In the Quarter-Finals he was again taken to the wire by club owner and former South African International JJ Faul. He had a more comfortable time dispatching David Rawlinson 11-4 in the Last 4 before an 11-9 success over Paul 'Seb Web' Webster in the Final.

Wales' Cory Rees emerged from an extremely tricky route to claim the 'B' event title.

​This included victories over Jez Graham, Nosko, Shane Thompson, David Hunt, Michael Oliver and pre- tournament favourite Aaron Davies in the Final. Despite this incredibly tough run-in, only Hunt took more than 8 frames off him.

​The Grand Final would be a re-match of the earlier mentioned clash in the B Last 32, although both cueists had already assured themselves of a £2,500 payday for winning their respective draws.

​Nosko would have his revenge; running out an 11-7 victor to become the Grand Final winner and bank an additional £1,500 bonus on top.

Three players managed to reach at least the Quarter-Finals of both the 'A' and 'B' - Hunt, Craig Lakin and Mark Bowen.

The whole event was streamed live by Beard Productions. We credit them for the picture above.

Written and published by Michael Day on the 13th December 2016 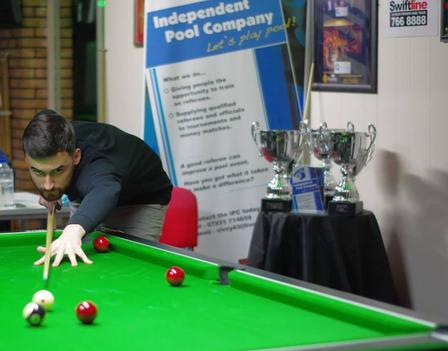