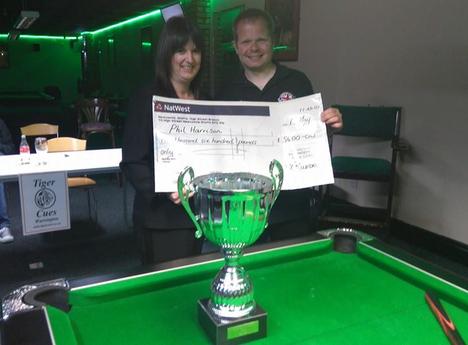 Phil Harrison became the inaugural winner of the Savanna Elite 500 after going through the entire weekend in Manchester unbeaten.

​​The first major event to be organised by the Independent Pool Company (IPC) featured 32 of the best English 8 Ball Pool players on the planet; 8 of which being World Champions. Played to Blackball Rules, this was a true 'Double Elimination' test of mental stamina throughout. Entry fee was a £500 buy-in.

Harrison began as the favourite, he only shortened his outright price further with early victories over Mark Thrussell 15-7, Rob Chilton 15-10, Neil Raybone 15-9 and Simon Ward 15-8.

Returning the next day, he recovered from an early deficit to oust Clint I'Anson 17-15 in the 'Hot Seat' fixture.

His opponent in the Grand Final was fellow Englishman Marc Farnsworth, who showed great determination and resolve in emerging from the 'Loser's Side'.

Despite successes against accomplished stars Kristian Phillips and Tom Cousins, he couldn't quite make it a hat-trick of Welsh scalps when being downed by the impressive Steve Martin 15-10.

He started his long road back via the 'B' route with a 9-4 win over another Welsh wizard in Craig Marsh, thus securing a top quarter payout.

'Ginge' was back in action Sunday at 9am; he would still be competing at the venue a good 19 hours later!

Gareth Hibbott (reigning IPA World Champion), Ward and Martin (therefore gaining revenge for his loss on Saturday) were all eliminated during his onslaught.

The third place match saw him pitched up with I'Anson, and in the most dramatic of circumstances, Marc claimed the last four frames for a thrilling 17-16 comeback win - Clint having opportunities before the decider to wrap it up.

​Phil started the championship encounter as a firm favourite given he had both lives still intact. With previous matches in the schedule over-running, the past midnight start would surely suit a fresher Harrison, who had only played one match on Sunday compared to his opponent's four.

Indeed, during the opening exchanges, Harrison motored to a 4-1 advantage. However, an ill timed kick (a re-occurring theme throughout) surely cost Phil Frame 6.

For a while, it appeared this was a turning point, as Farnsworth chalked up four on the spin for a 5-4 lead.

​But 'The Farmer' went one better with a five frame winning sequence of his own to go in front at 9-5 - a lead he never relinquished on his way to a 17-14 victory.

Harrison, the 2009 WEPF World Champion, adds yet another prestigious title to his significant Pool CV. He also banked the bumper £5,600 winner's kitty.

The event was live streamed by Beard Productions. Please visit their Facebook page too.