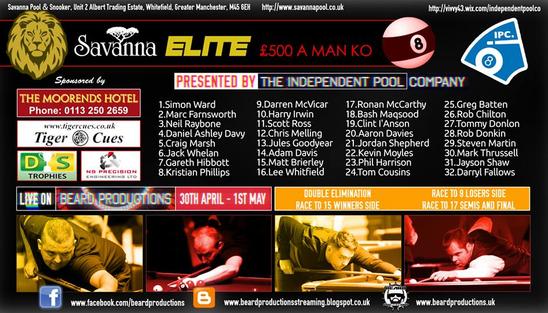 The draw for the inaugural Savanna Elite 500 was made on Saturday. This unique 32 player event features some of English 8 Ball Pool's greatest ever exponents. Inevitably, there were some mouth-watering fixtures​ picked out of the bag.

One of the stand out ties is the all Welsh clash with two time back to back WEPF World Champion Tom Cousins against UK Open and IPA main tour & professional winner Jordan Shepherd.

Reigning IPA World Champion Gareth Hibbott faces a very tough task after he was pitched up with an in-form Dan Davy - fresh from his maiden tour title in Newport last month.

2014 IPA WC Jack Whelan is paired with Craig Marsh; the decorated potting machine who was ousted by Hibbott in a deciding frame thriller for this year's title in February.

​​The ever popular Phil 'The Farmer' Harrison has been ripping it up on the UK Tour recently. The 2009 WEPF king is top of the UK rankings, having reached the final of the last three competitions straight (winning two of them). Harrison has a date with the accomplished Mark Thrussell.

After having a stellar 18 months in the USA on the American Pool circuit, 2010 WPA World Blackball Champion Jayson Shaw returns to his smaller table roots, whilst the multi-talented Chris Melling (2001 & 2003 WEPF WC) also features as he aims to add this crown to his already eye popping Cuesports CV.

In truth, every match should be an absolute belter, with a number of players not before mentioned with significant honours and prizes to their names.

You can catch all the action live and for free via Beard Productions. The event is organised and run by the Independent Pool Company (IPC).

First Round Draw for the Savanna Elite 500