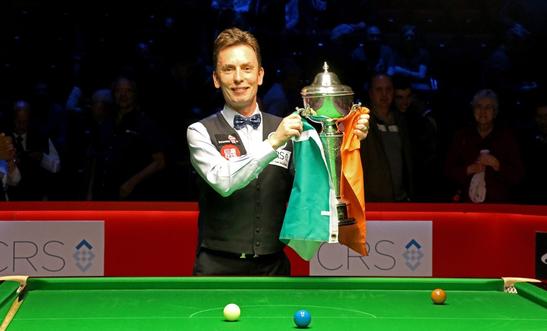 Whilst all the other seeded players fell at their first hurdle, Ken Doherty bucked the trend and went all the way at the Bonus Arena in Hull to win the 2018 UK Seniors Snooker Championship.

Reigning World Seniors Champion Aaron Canavan was another seed to bite the dust on Thursday morning, but 1997 World Champion Doherty stopped the sequence with a comprehensive 3-0 victory over fellow Irishman Rodney Goggins.

Returning later in the day, Doherty repeated the scoreline against Thailand's Suchakree Poomjang during the Last 4. Suchakree, brother of Dechawat, made the draw after winning the Hong Kong qualifying event last month. The Thai was making a name for himself in Hull after dispatching Taylor and then White, both 3-0.

Come the Semi-Finals, it was an exclusively non-UK show. Brazil's Igor Figueiredo qualified by virtue of his success at the World Snooker Federation Seniors Championship in Malta earlier during the year. The recent main tour professional was impressive in reaching the final; like Doherty, he got there without dropping a frame, eliminating Johnson, Canavan and Leo Fernandez. The latter had seen off Hendry the night before after a black-ball shootout.

There was a fast start in the final for Doherty who made a 116 break to settle his nerves. He then doubled his advantage with the next. However, Figueiredo kept himself in touch as he took the third frame with an effort of 71.

​After the mid-session interval, though, the popular 49-year-old completed the job. Breaks of 50 and 59 in Frame 4 put him on the hill, and after a safety error from his opponent in the next, Doherty did what was required to claim the title, trophy and £10,000.

It was the fifth time lucky for Doherty in regards trying to obtain a UK title. He lost in the final of this event to White last year, and had previously been a runner-up in the professional version three times in 1994, 2001 and 2002.

Showed live in its entirety by FreeSports TV, the tournament was very well supported both at the venue and by fans online. It is great news that the championship is secured at the Hull venue for at least the next two years.

The image above is courtesy of World Seniors Snooker