SEVENTH HEAVEN FOR FENYVESI IN HUNGARY

Zsolt Fenyvesi retained the Hungarian National Snooker Championship last weekend - it was his seventh success in the event since 2010.

Held at the Terminal Snooker Club in Budapest, a venue that recently hosted World Snooker's Challenge Tour Event 8, over 40 players competed in a straight knockout format for Hungary's most prestigious amateur snooker title.

​For the third year running, his opponent there was number 2 seed Attila Horvath, who eliminated Pal Vantara 5-2 in the semi-finals. Vantara later ousted Revesz 5-4 in the third/fourth place play-off.

On resumption Fenyvesi extended his lead with a contribution of 102. However, unperturbed by his rival's heavy scoring, Horvath responded by taking the next three frames to level affairs at 5-5, then aided by a run of 55 he went 6-5 up and just one away from glory.

In another turnaround, though, Fenyvesi showed class when he produced a 72 break to square it up before claiming the deciding frame for a gripping 7-6 victory.

​The picture above is courtesy of Marta Csaszar 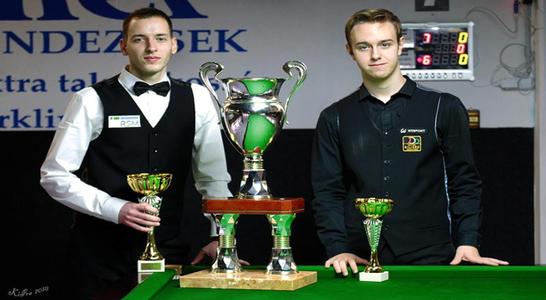