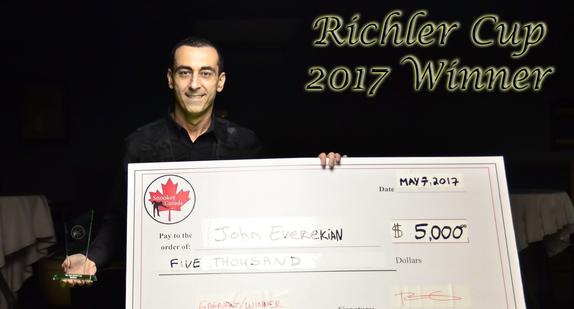 Canada was undoubtedly one of snooker's supreme forces, throughout, and either side of the 1980's. However, since the mid 1990's, Canadian representation on the professional circuit has almost been non-existent. For some reason, the next generation in North American failed to capitalise on the success of 1980 World Champion Cliff Thorburn, and Canada's World Cup wins in 1982 and 1990.

An organisation called Snooker Canada, though, are trying to re-ignite the snooker flame across the Atlantic. Founded in 2011, a statement on their website reads -

​"Our mission is to encourage players at all levels to enjoy and develop their skills within the game. This is done through various programs and events throughout the country.

With snooker increasing in popularity all over the world, we are excited about the direction in which the game is headed. The ultimate goal is to have snooker become a participating sport in the Olympic Games."

Last week, the annual Richler Cup was held in Burrington. This is the biggest snooker tournament that Canada currently hosts; it boasted a seriously impressive $12,500 prize fund.

It is held in honour of Mordecai Richler; a very interesting sounding character who played and wrote about the game. There is a terrific article about him and this event here.

Held across 4 days, the competition featured a true double elimination format. A system familiar to people of the Pool communities, this basically means players have '2 lives' and are only eliminated from the event when they have lost two matches.

Personally I really like this format, and I believe it should be used for more tournaments over here. As Snooker Canada said on their website, people travel great distances to compete and want value for money. I also think this is a fairer system than a 'Round Robin' model.

The championship featured in depth live streaming through the Snooker Canada Facebook page with graphics and statistics. If you go over to their page and check the matches out, you will notice that the tables they play on seem to have American Pool style pocket surrounds.

Players from both the host nation and the USA competed. The title, and a $5,000 payday, was won by Ontario's John Everekian.

​Everekian advanced to the final undefeated where he would meet 'B Side' winner Renat Denkha from America. Denkha actually won their first match 4-1, which meant both were now on their last lives.

As a consequence, there was a 'winner take all' best of 3 to determine the destiny of the trophy. Everekian turned it around, winning 2-0.

The highest break of the competition was also made by Everekian - a brilliant effort of 122. Fern Loyer constructed the other century, a 120. There was a string of high double figure breaks too.

Many congratulations must go to Snooker Canada for professionally organising what looked like a terrific event with multi-disciplinary coverage. In a nation where American Pool is by far and away the most popular and most played Cuesport discipline, they are trying to get natives involved with snooker.

As you will see on their website, they offer a lot of advice and incentives for people to get involved with the sport.

I wish them all the best!

Picture above is courtesy of Snooker Canada and The Pool Scene.

Written and published by Michael Day on the 9th May 2017