Providing online sports betting and casino games, bookmaker K8.com is the headline sponsor for this tournament. You can take advantage of their free bet offer by following the instructions in the image above.

Currently sitting on top of the series' ranking list is Phil Harrison, who last month ousted Mick Hill in possibly the greatest final the sport has ever witnessed when winning the Supreme Masters at the Players Pool and Snooker Lounge venue. Following on from his glory at the Strachan Cup in July, it marked back-to-back SPS triumphs for the Cambridgeshire cueist; an incredible feat when you consider the strength and depth of talent on show.

Already an all-time great, you wouldn't put it past the 44-year-old to make it a hat-trick in Newcastle-under-Lyme. However, in what is a seriously stacked section of the draw, Harrison begins his campaign on late Friday afternoon against Jason Owen Open, Event 1 champion Scott Gillespie of Scotland.

​Reigning IPA World Champion Ben Davies and former IPA and WEPF World Champions in Gareth Hibbott and Shaun Chipperfield, respectively, are also in Harrison's part of the draw, as too are Jon McAllister, Lee Clough and Jordan Church; amongst others. Only one player from this bracket can qualify for the Last 16 Knock-Out phase undefeated - an example of how brutally tough this landscape can be.

Despite only being stopped by Harrison in both his previous two SPS tournament outings, the current, and five-times WEPF World Champion Mick Hill starts the K8.com Classic as the bookies favourite once again.

Hill, who reached the Last 4 of the Strachan Cup as well, will be hoping that the back complaint he was suffering with last month does not effect him when he meets Jamie Moray first up.

Reigning BI World Champion Liam Dunster has been one of the sport's most consistent performers over the last few years. Still only young and with yet more potential for a bright future, he is without question one of English 8-Ball's hottest properties.​

The Scotsman has again proved this during the series with consecutive final appearances in the first two events. Second in the SPS rankings, Dunster will be keen to convert another deep run here into a winners trophy; obviously a tough ask, but he will be playing his favoured discipline of Blackball. He crosses cues with Richard Twomey on Friday morning.

SPS third placed Marc Farnsworth will also be pleased that Blackball Rules are present this weekend. The North-East Englishman has Quarter and Semi-Final finishes to his name already, although he'll be looking for an even bigger payday this time out. Mandeep Jhinger is his opening assignment.

Predictably, both Tom Cousins and Ronan McCarthy are high on the rankings list and among the very fancied for success in this fourth event. They face Matthew Schofield and current European Blackball Champion Ryan Fleming respectively. Karl Sutton, who has claimed the last two UK Tour titles, will be hoping his great form continues when he plays Mark Astbury.

In a competition full of riches, just some of the stand out ties in the first round include Karl Boyes v Marc Fleming, Adam Davis v Jimmy Croxton, Mark Boyle v George Tierney and Craig Marsh v Ryan Clark.

Sticking with the same format that proved to be popular at the Supreme Masters, all 128 players in the K8.com Classic will play a double elimination qualifying phase where eight will emerge from the Winners' Side and eight from the Losers' Side. The Last 16 onwards is then single elimination. Last month Harrison was immediately pushed to the Losers' having been defeated in his first match, but after overcoming a gauntlet of high profile players he still went home with £10,000.

This is the last stop on the series before the season ending Home Leisure Direct Grand Finals where the champion will bank £51,000 - the largest individual amount ever awarded in an English 8-Ball Pool tournament. After this fourth event is completed, the rankings will determine seedings for the finale in late November/early December. To qualify for the finals, players must have competed in at least three of the four previous legs.​​​ 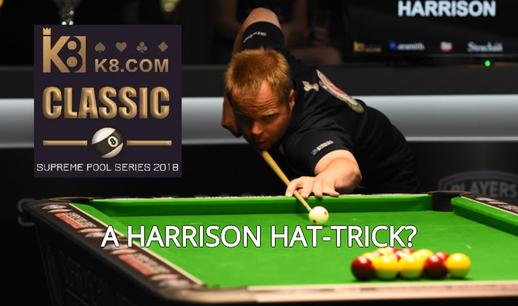 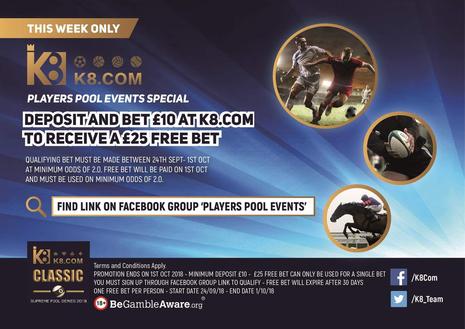