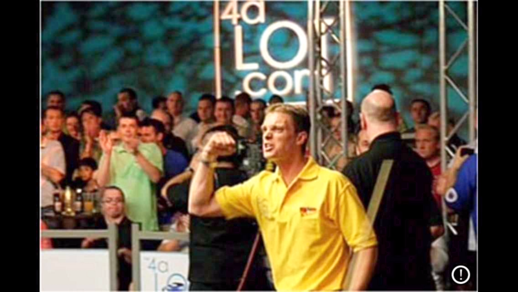 Who is the winner of the biggest payday in English 8 Ball Pool tournament history?

Gareth Potts? Mick Hill? Darren Appleton? No, it's Frank Sargent; and by some considerable distance.

Sargent was the first - and as it happened, only winner of the Pub Pool Challenge, which concluded at the Ricoh Arena in Coventry during the summer of 2006.

The victory, which was televised as a highlights programme on Sky Sports, saw him bank a whopping, winner-takes-all £50,000.

This amount completely overshadows any else English 8 Ball has ever offered in terms of structured events. Over a decade on, the most that any World Championship (either rule set, any organisation) can boast is £10,000.

As you are probably already aware of, though, this was no ordinary formatted tournament. This was a unique 1-frame Knock-Out competition that started off with thousands of entries in numerous pubs and clubs across the UK.

Venues had the opportunity to host and run a qualifier, although I understand they had to pay a fee for that privilege - I believe around £70. If a player from their venue reached the TV stage in Coventry, the name of their establishment would be advertised on the back of that player's shirt. Sargent's local pub also received £1,000 for being the home of the champion.

Players paid £5 to enter. As soon as you lost, you were eliminated from that qualifying event, although players did have the right to reply had they been 'break and dished' by their opponent.

All these local qualifiers progressed to regional heats and the process was repeated. The winners of these regional heats then advanced to the TV showdown.

The TV stage was a proper, professional set-up. It featured referees Mel Harley and Michaela Tabb, a 'cage' where players awaited their fate, a healthy audience, a presenter and title sponsors in 4alot.com.

Names of the players were put in to the bowl and drawn out at random. The loser would be eliminated and had their name (and dreams) thrown away, whilst the winner saw their name go back in. It was like an elimination style gauntlet.

These final stages featured players we are familiar with now such as Oly Bale, Scott Ross and Nigel Clarke, but it was the slightly less well known Sargent who kept his cool and emerged the winner.

The small stakes and insanely short race obviously enticed a lot of people of varying abilities to enter. At the time of his win Sargent wasn't playing county pool, although he did have 5 years experience of representing Kent - 3 of those being in the A Team.

In total, on his way to glory, he won 15 frames from the start to the end of his complete campaign - 5 of those coming on the TV table, which was strangely played with yellow and blue balls.​

Sargent kindly talked to us here at The Cue View to relive his experiences and feelings across that tournament, he also recalls how close he was to elimination himself -

"There were many times I thought I was out. I thought I was going to lose my first match against Nigel Clarke but he missed a straightforward black.​ I remember there was a lot of pressure, though, so there were uncharacteristic misses from many of the players on that Finals Day.

I also remember Scott Ross missing a black in the middle that I actually thought was in, giving me the chance to clear up. Obviously Oly had a chance in the final frame also, although it wasn't easy.

Playing the final frame against Oly was an incredible experience.  The atmosphere was electric with so much tension in the room.  Strangely I felt quite calm and wasn't thinking about the money, but just trying to win a frame of pool, which happily for me I was able to do.

Playing Oly in the final made it easier to deal with. He had all the pressure and expectation to win it. He was the European Champion so there wouldn't have been any disgrace if I had lost to him.

After I won I was in total shock and just couldn't believe it. It was the type of thing that happens to other people not me.  It was a life changing experience. I was being recognised out and about and lots of people wanted to speak to me about it.

It's nice that even now people still remember and talk about it".

With unheard of, life-changing money on the table and the finishing line getting close, it has been suggested that a deal amongst those remaining was arranged to chop up the pot. Sargent told us about that rumour -

"In regards to deals, I did hear that some players had come to an arrangement to carve up the prize fund (I heard this after the event), however I wasn't included in this and I can confirm I took home all the 50k"

So, does Frank still play Pool?

"I don't play County any more, but I do still play in my local pool league and Interleague for Romney Marsh. I still love playing but don't play as much as I would like due to other commitments and family life."

Even if Sargent was to never pot another ball again, his name is etched in the sport's history. This single victory makes him one of the highest tournament earners in English 8 Ball Pool ever -

"Obviously winning that kind of money from one event is incredible.

I certainly don't compare myself to the likes of Potts, Appleton, Hill etc. The format of the Pub Pool Challenge was to give any player a chance to win £50k and fortunately I was lucky enough on the day to win it.

I thought it was a great concept with a lot of potential, so it was sad to see it fold the following year."

As Frank mentioned, he never got the chance to defend the title, although I guess he ended up as the undefeated champion.

In 2007 the tournament was scheduled to again take place; now defunct lads magazine 'Nuts' were heavily involved in the promotion and organisation of it.

In a change to the entry method, though, players had to text in to enter, something that Sargent felt caused its downfall.

I personally remember entering the 2007 edition and later getting told of its cancellation. I can also recall being told I could receive a special 'Nuts' Pool cue, although I'm not sure anyone in a similar position got one.

Unfortunately there isn't much on the internet regards the event, although people on a forum I found did question where the texted entry fees eventually went, which is a very good point.

​In terms of prize money, nothing in the same stratosphere comes close to what the Pub Pool Challenge offered. The IPA did a one frame challenge event which was streamed in Brighton a few seasons back (which was an exciting idea, btw) but I believe the winner 'only' got £500.

English 8 Ball Pool as a whole has generally been a poor relation in terms of prize money compared to other Cuesports with almost all events' prize funds being solely comprised of entry fees.​

There are many, many hard working and dedicated individuals in our sport that give up their own time because they have the passion. That goes from the grassroots, all the way up to the professional/tours set up. But the Pub Pool Challenge showed us that if big brands could come on board, there maybe better earning opportunities and potential.

Of course, having been such a incredibly quick format, effectively everyone theoretically had a chance of picking up at least a couple of wins. The event needed those thousands of entries to get up and running, something that apparently didn't happen in 2007.

Is it time someone tried something like this in English 8 Ball again?

I would like to thank Frank Sargent for his time and insight. It was a pleasure to talk to you, and I really appreciate your time and effort for this article.

Written and published by Michael Day on the 15th September 2017