Several national championships in Belgium have been claimed over the last few weeks.

​Former professional player Kevin Van Hove defeated 15-year-old Julien Leclercq 7-5 in the final of the main event to become the Belgian National Snooker Champion for the second time after his maiden victory in 2004.

Van Hove, who has reached the final of this tournament another six times during his career, had to start this year's competition from Round 1. With a starting entry of over 100 players, he came through seven rounds and eliminated defending champion Jeff Jacobs along the way - gaining some measure of revenge for losing to him in the 2017 final.

The success will be somewhat sweeter for Van Hove who has had a very difficult time away from the table recently. An added bonus for him is being nominated as a wildcard for this season's World Snooker Challenge Tour. He has traveled to Burton in England to compete in Event 1 this weekend.

Wendy Jans continued her supreme dominance of the Women's scene in Belgium by dispatching Melissa Eens 4-0 in the final to chalk up the title again; apparently for the 16th time.

​Kobe Vanoppen ousted Ben Mertens 6-5 to win the Under 21 Championship, whilst Mertens and Leclercq contested the finals of both the Under 16 and 18 categories. Leclercq won 4-0 to claim the U16s and Mertens won 5-0 to deposit the U18s.

These championships were held between the 10th-27th May in Sint-Truiden and hosted by the Belgian Billiards and Snooker Association (BBSA).

Many thanks to Gery De Mol and Kevin Van Hove for their generous input of knowledge towards this article.

To find out more, please visit the BBSA website here. 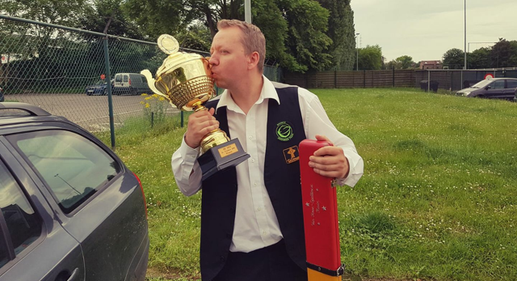