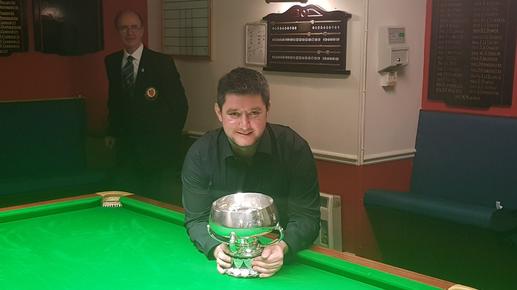 ​After a long wait, Martyn Desperques claimed his fifth Channel Islands Snooker Championship a fortnight ago.

The annual event is a one-off match between the current Guernsey and Jersey Snooker Champions – titles which were decided a few weeks before. The islands take turns to host the championship fixture.

Desperques secured a ninth Guernsey Snooker Championship with a comeback victory over Adam Shorto in the final.

In the 83rd edition of the tournament, Desperques recovered from 2-0 and 4-2 down to record a 5-4 win in front of a healthy crowd at the Gremlin Club on the island.

Gary Britton won the Jersey Snooker Championship for the fifth time with a 4-0 success over Karl Le Fevre in the final.

Breaks of 90, 77 and 42 helped Britton establish a 3-0 advantage. He then made a 40 in Frame 4, although an effort of 68 from Le Fevre left him needing a snooker on the colours. However, Britton got a snooker and the penalty points, and then subsequently cleared the table for victory.

The Channel Islands Final was held the following week at the First Tower Club in Jersey.

Britton constructed breaks of 97 and 138 in the frames he won, but it was Desperques who emerged a 5-2 victor to regain the trophy he last lifted in 2009.

Aaron Canavan (Jersey), who is the reigning World Seniors Champion, denied Desperques in a deciding frame during the 2017 C.I. Final.

Guernsey also ran a Ladies Snooker Championship for the first time in ten years which saw Kate Le Gallez defeat Yvonne Bogue 3-1 in the final for the title. Le Gallez is now the island's female Pool and Snooker Champion.