Schulte, who first won the title in 2015, was the last player standing from a starting entry of 37. The event was held at the Snukerio Akademija in the capital city of Vilnius and ran by the Lithuanian Billiard Federation, who hold a structured series of ranking events throughout the season.

On his way to the final, Schulte dropped just two frames. His opponent in the title match was promising 15-year-old Nikita Kolpačenko, who already had a tournament win on the circuit earlier this season.

Kolpačenko chalked up the opening frame, but Schulte eventually recorded a 4-2 victory to claim the championship.

​During his Last 16 match against Igoris Olchovich, Schulte made a break of 83, which would be the highest of the competition. He also racked up several other useful contributions.

Teenager Kęstutis Žadeikis, who was a Silver Medalist at the 2016 European Youth 9-Ball Championship, reached the Quarter-Finals where he was ousted in a deciding frame.

​Many thanks to Andrius Petkevičius, Head of Snooker at the Lithuanian Billiard Federation for his information and allowing me to use the image above.

Article written and published by Michael Day on 11th May 2018 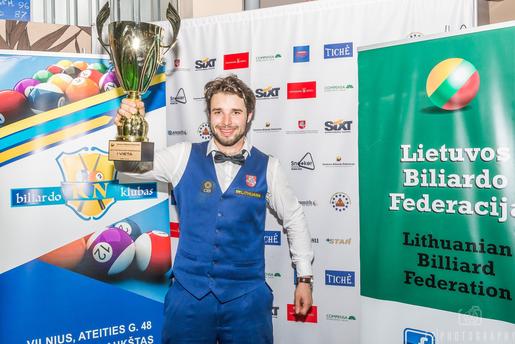