Located next to the Black Sea and in the Caucasus region of Eurasia, the country of Georgia is starting to wet its appetite for competitive Snooker.​

Traditionally, like other post Soviet Union countries, Russian Pyramids and Pool are the most played Cuesports in the nation. However, the people in charge of the sport there are seeing Snooker's popularity increase and this is reflected in the growing entries for the annual Georgian National Snooker Championship.

The first national championship was held in 2016 with 16 entries; Sandro Kadagidze defeated Nodar Bakradze 7-4 in the final to become the first ever Georgian Champion. In 2017 numbers rose to 24 and Bakradze went one better when he claimed the title following a 4-2 victory against Alex Jangulashvili.

Over the last few weeks the third staging of the tournament took place with 28 entries, four of which were youth players under the age of 18. Reaching the final for the third year in a row, Bakradze defended the title with a 4-0 final success over Gocha Kavtaradze.

​George Durglishvili from the Georgian Snooker Association said they are committed to making Snooker the most popular Cuesport in the country and to become a competitive nation playing it.

They realise that this will take time, but they are clearly passionate and focused about achieving these objectives. The association aims to get as many people playing snooker as possible, especially the younger generation.

We congratulate George and the association for the progression they are making; we hope to report on more snooker events there in the near and distant future.

Thank you to George Durglishvili for his time and assistance in producing this article. It was greatly appreciated!

Picture above is courtesy of the Georgian Snooker Association. 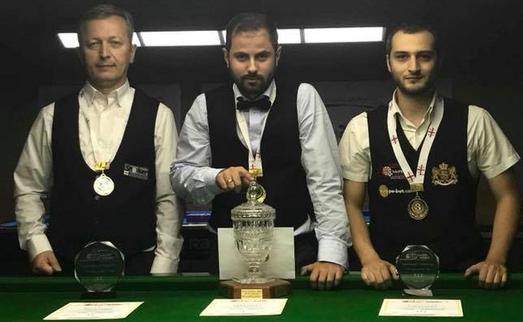