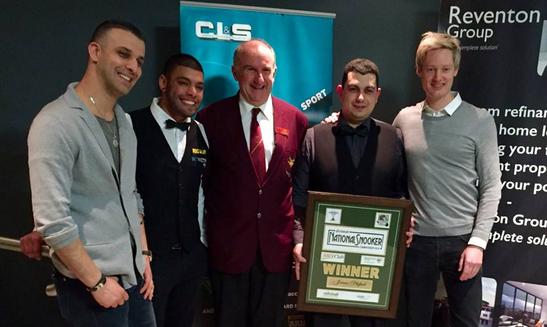 ​​​THE AMATEUR ANGLE - EXCITING TIMES FOR

​Amateur Snooker in Australia is buzzing following the announcement of significant backing from long term sponsors, the Reventon Group.

​Chris Christofi (pictured above, far left), a snooker fan and a very accomplished player himself, is the owner of the Australian company who specialise in Investments and Property. Keen to see the sport thrive 'Down Under', he has been a consistent financial supporter of events on the amateur circuit there.

​This season, though, the stakes have been raised again with the exciting and lucrative addition of the inaugural 'Reventon Snooker Triple Crown' which consists of three big money tournaments in 2018.

​As well as five figure first prizes in each, there are notable bonuses on offer too throughout the series.

MASSIVE REVENTON PRESS RELEASE
2018 will be the most lucrative for our snooker players with the introduction of two major events on the ABSC calendar and the newly formed "Reventon Snooker Triple Crown".

Chris Christofi from Reventon has generously agreed to increase sponsorship again this year. All three events have a minimum $10,000.00 first prize of which two of them are $15,000.00 – Reventon's goal each year is for our events is to keep increasing the prize money, this has been achieved to date and will continue.

The first event being The Reventon Classic, which will be held between May 4th-6th The prize money will be $25,000 ($10,000 first prize). The event will be limited to 96 players and carry double ABSC ranking points.

The second being The Reventon International and is scheduled for December 6th – 9th. The prize money will be $50,000 ($15,000 first prize) the most ever on offer in Australia. There is a limit of 128 players, but we should fill the field easily and will be the first tournament to carry triple ABSC ranking points. The eventual winner receives a "walk in start" for The Reventon Masters.

The final event will be The Reventon Masters – Winner Takes All Event scheduled for December 14th – 16th. This is a Winner takes all event ($15,000 first prize). This event includes two 147 events to be played on the final day (Men's and Ladies) and will carry $25,000 prize money across all of the events.

The Australian Billiards & Snooker Council extend our sincere thanks to Chris and his Company Reventon for their extremely generous sponsorship of our great game.

All these events are currently sponsored 100% by Reventon.

​​This sort of prize money for a national amateur tour is quite staggering and surely the envy of many other national governing bodies and organisations.

These events are also open to non-Australians, meaning amateurs from anywhere in the world are invited to play in them.

​Image above is courtesy of the Australian Snooker and Billiards Council

​Many thanks to Shawn Budd and Shannon Dixon for their assistance on this article.

​Written and published by Michael Day on the 14th February 2018