41 players started the event at the NB Club although 33 of them had to play a groups phase first with 16 qualifiers making the Knock-Out rounds and joining the top 8 seeds.

​His opponent in the final was Number 2 seed Maris Volajs, who had dropped just one frame on route. However, Judin would secure this particular title for a fourth time following a 7-3 victory, winning five frames in a row after being 3-2 behind.

Including other categories too, this was Judin's 14th National Championship. He is a two-time Baltic Snooker Champion and last summer was given a wildcard into World Snooker's Riga Masters where he defeated Chen Zhe 4-0 before losing to Robin Hull 4-2 in the Last 64.

He was also the first Latvian player ever to compete in World Professional Championship Qualifying when he was selected as a wildcard in 2015, and again in 2016.

The governing body that looks after Snooker in Latvia is the Latvian Republic Billiard Federation.

Image above is courtesy of Rodion Judin 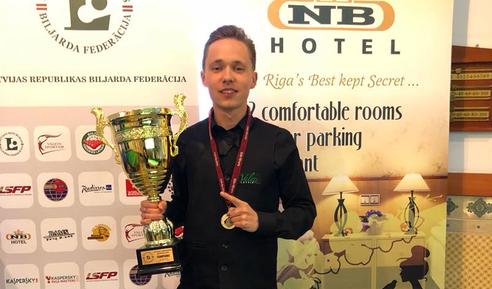