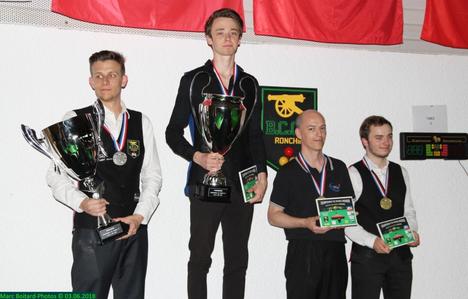 Fresh from competing at Q-School in England, Brian Ochoiski returned to his native land to win the French National Snooker Championship for the first time in his career.

This year's event was held over the weekend of the 2nd and 3rd of June in Ronchin, Northern France. 24 participants took part, but following the Groups stage and the Last 16 Knock-Outs, just eight remained come Sunday.

There were no surprises as the seeds advanced to those Quarter-Finals. Defending champion Neil Vincent (another recent Q-School entry) defeated Jean Christophe-Margontier 3-0 whilst in the same half of the draw French Number 1 Ochoiski eliminated French Number 2 Fabian Monnin by the same scoreline. Elsewhere in the Last 8, Alexis Callewaert saw off Nicolas Mortreux 3-0 and Jean-Marc Beauchamp ousted Adrien Frostin 3-2.

In a repeat of the 2017 final, Ochoiski was able to inflict some revenge on Vincent in this year's Semi-Finals as he dethroned the champion 3-0. Callewaert mirrored that result against Beauchamp in the other tie.

​Ochoiski, who finished 46th on the Q-School Order of Merit and has qualified for this season's Challenge Tour by right, managed to get the job done in the final with a 3-1 victory.

This tournament was run by the French Federation of Billiards. The image above is courtesy of Marc Boitard.