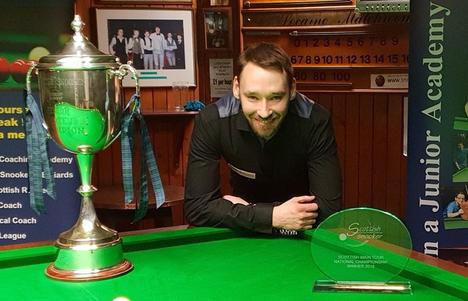 12 years on from claiming the title for the first time, Fraser Patrick is once again the Scottish National Snooker Champion.

Played in stages, Scottish ranked Number 1 Patrick came through the early rounds to reach the Quarters and Semi-Finals which were held at the Q-Club in Glasgow. There he eliminated Dylan Gault 5-2 and Michael Collumb 6-1 to book a berth in the final.

The Locarno Club in Edinburgh played host to the National Finals Weekend where other categories were also completed. Patrick defeated defending champion Ross Vallance 7-4 to take the trophy, £600 and an amateur wildcard spot at next season's World Snooker Scottish Open.

32-year-old Patrick will be hoping he is part of that tournament as a professional, as he has entered this month's Q-School in Burton in an attempt to reclaim his top tier status. A tour card holder for five seasons, he was relegated from the circuit at the end of the 2016/17 campaign.

He will be joined in Burton by fellow countrymen Marc Davis, Dylan Craig, William Thomson, Keith Keldie and Collumb.

Next up in Scotland is the annual PMK Pro-Am at the Minnesota Fats Club in Glasgow. This year's edition again features several professionals including former World Champion Graeme Dott and two-time ranking event winner Anthony McGill.