THE AMATEUR ANGLE - SWEET TREATS FOR KANDI IN DENMARK

Daniel Kandi enjoyed a memorable few days as he created history when constructing a 147 maximum break on the way to winning his sixth Danish National Snooker Championship.

Held at the Copenhagen Pool and Snooker Club across the long Easter weekend, Kandi was one of 16 seeds who automatically went straight into the Last 32 Knock-Outs. These seeds were joined by 16 qualifiers who emerged from a qualification section which was played in Round Robins across the Thursday and Friday.

During the third frame of his 4-0 opening round victory over ​Bo Jarlstrøm, Kandi performed perfection which concluded in emotional and embracing celebrations with players, officials and spectators alike.

The achievement has been widely covered by various media in his homeland. Not only was it his maiden 147, but the first ever to be made in a Danish tournament. The closest in comparison is 13-time national champion Rune Kampe crafting one in practice.

Returning the next day, Kandi continued his assault on the title. Eliminations of Danny Eriksen and Gustav Raffenberg, both 4-1, in the Last 16 and 8 respectively got him into 'Finals Day'

​There he defeated Ali Ijaz 4-1 in the Semi-Finals. In the final he faced 5-time champion Allan Norvark, who was looking to take the top prize for the first time since 2000. Norvark saw off defending champion Martin Søndergaard (4-2) in the Quarters and Kampe (4-1) in the Semis.

However, Kandi completed the job with a 5-1 success. It meant in total he had dropped just four frames in five matches throughout.

Kandi, who is a well-known and popular Danish Trance Music Producer and DJ, will be competing at the upcoming Q-School in May as he attempts to break onto the top tier of the sport.

For further information on this year's championship - and the full results, please visit snooker.dk 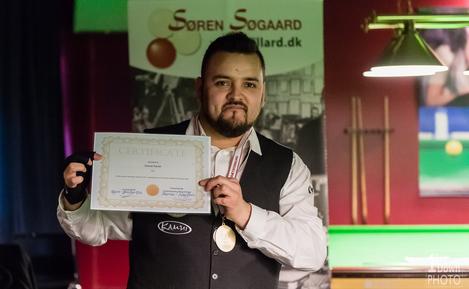