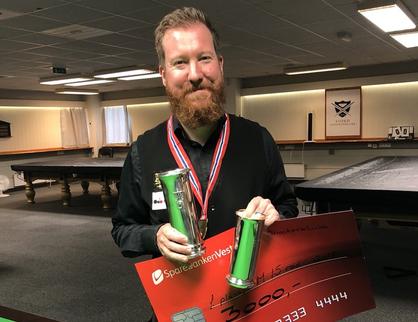 THE AMATEUR ANGLE - WATTS A PERFORMANCE IN NORWAY!

Christopher Watts was simply untouchable as he won his fourth Norwegian National Snooker Championship last week at the Stord Snookerklubb.

40 players began the event which ran from the 10th-13th May. The entry was divided into eight groups of five with the top two qualifying for the Last 16 Knock-Outs.

Watts was in a class of his own throughout the competition - he didn't drop a single frame on his way to the title.

After winning all four group fixtures 3-0, he eliminated Arnfinn Saue, Edwin Ingebrigtsen and Nassim Sekat in the Last 16, 8 and 4 respectively, 4-0. It was against Ingebrigsten (who is a commentator for Eurosport Snooker coverage in the country) where he came closest to losing a frame, a black ball finish in one frame and a re-spot in another.

In the final his opponent was Daniel Skaathun, who was also undefeated on route. However, Watts completed his perfect record by recording a 4-0 victory, which saw him make breaks of 69, 85 and 89.

Watts, who represents the Oslo Snooker Club, teamed up with professional Kurt Maflin to play for Norway at the World Cup in Wuxi, China at the start of the 2017/18 World Snooker Season. Overall Watts now has ten National Championship titles; he has won the 6-Reds event five times and the Team event once.

​The tournament was run by Norges Biljardforbund (Norwegian Billiards Federation).

The picture above is courtesy of Christopher Watts.